In any facet of society, one can find the best people, the worst people, or those who reside somewhere between those to extremes, and the same can be said about the poker world. While some poker pros are true ambassadors of the game and look to improve it for future generations of poker players, others try to cheat the system for their own personal gain.

In a recent TwoPlusTwo Forum post, users discussed a twitter thread started by Chris “Apotheosis” Kruk who spoke out about people cheating and scamming in the poker world. High stakes online grinder Bert “Girafganger” Stevens also chimed in to speak his piece about the state of the poker world.
Kruk initially tweeted expressing how he felt about the status of cheaters and scammers in poker.

Poker world is exhausting. So many clowns doing such shit things. Almost no recourse 99% of time. Only thing to do is make others aware. When done via twitter always results in a bunch of people defending the behavior- perhaps fellow scum worried about jeopardizing their ploys?

When asked what exactly he was tweeting about, Kruk went on to give some specifics.

One issue Kruk pointed to was players making use of real time assistance (RTA) software while playing high stakes tournaments. Commonly known as solvers, RTA software allows players to input hand data and figure out the most optimal play in real time.

According to Kruk, there are still players illegally using solvers. Giraf also chimed in. According to him, the cheaters who were outed on GGPoker are allegedly still playing on partypoker and PokerStars.

The banned accounts are on their 3rd or 4th wave lol. These boys play live 100ks. GG atleast on the case, they all play on Party and Stars highstakes.

Although some players are banned from a poker site once it’s discovered they were cheating, they can still return to the site with a new account. It’s commonly referred to as multi-accounting, and Kruk stated that it is a big issue.

Kruk was also outspoken when it came to other forms of cheating in online poker. Ghost tabling, a form of cheating where poker coaches will finish out a tournament for a student who runs deep, is a real issue according to Kruk.
Coaches are able to tune in to the players tournament via apps like TeamViewer or Skype and tell them exactly what to do and when to do it. According to Giraf, a notorious ghoster was made a PokerStars pro.

“But for example, PokerStars made the biggest ghoster in the history of the game a Stars pro,” he said. “Rafael Moraes [has been] running a slave/ghost stable for year now and no one cares.” 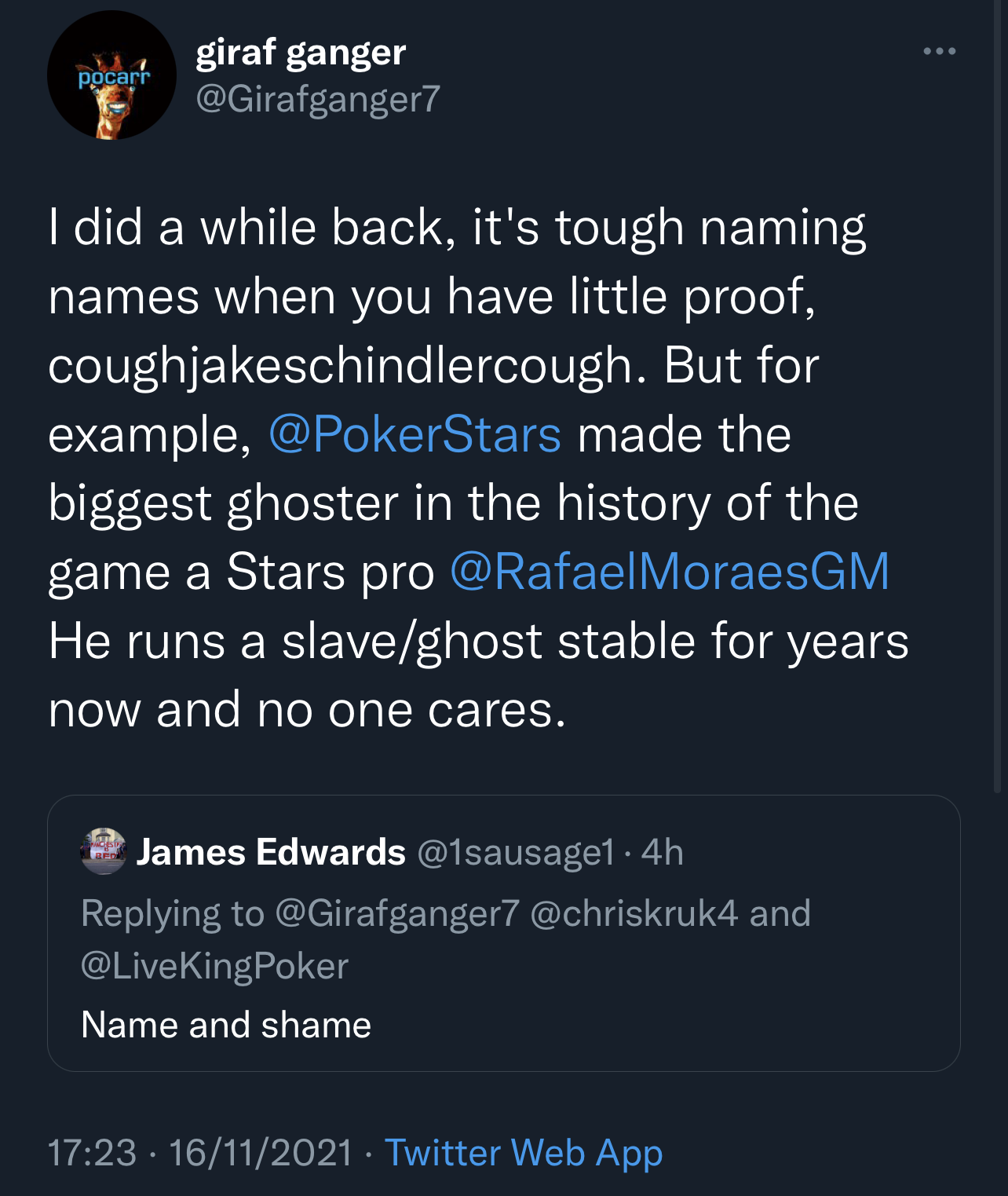 This year’s WSOP returned to live play after COVID made last year’s series an online event. With the return, Las Vegas casinos required proof of vaccination upon entry. Kruk said he had heard of players using fake vaccination passports and even playing while they knowingly had COVID.

Kruk also spoke about players selling action at insanely high mark-ups and people selling poker training content despite having little to no success in the game.

All the guys selling to their “friends” or “fans” at insane MUs, jus blatantly ripping off the people who support them. This most recent stuff exploiting homeless people for profit. Other cases of well known multi accounting. The guys killing live games in vegas for private ones

It seems as if Kruk had reached a tipping point and had to get the word out there and discuss these topics with other people. The question remains, however: if there’s this much cheating in online poker, is there a way to truly get rid of it all?

The XL Winter Series on

What’s the Difference Between Pure Gambling and Professional Betting?

08:1520 JanTomorrow marks the start of the latest edition

Rather than focus on the potential downsides this is a cu