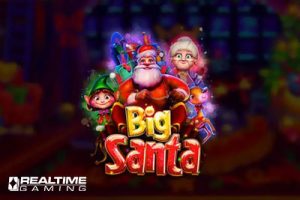 Spin Logic released a holiday-themed video slot, Big Santa, on the Realtime Gaming (RTG) platform on Thanksgiving Day. The game features stacked symbols and oversized symbols large enough to cover up to 9 reel positions on the five-reel, 3 position reel set. It has twenty-five fixed paylines with spins starting at $0.25 each.

A young Rudolph the Red-nosed Reindeer is the wild symbol and he can appear stacked or as an oversized symbol anywhere on the reels as well. Santa’s toy bag is the scatter symbol and 3 or more awards an increasing number of free spins starting at 10. Look on the left side of the slot screen during free games to see which multiplier between 2x and 5x the meter stops on. Free games can be triggered infinitely, or at least until you’ve won 50,000x your line bet when the feature will end automatically.

Santa, Mrs. Clause, and an Elf are the highest paying symbols followed by the minor symbols of a stocking, present, coffee cup, pancakes, and Christmas bell. Only the wild and major symbols appear to cover 2×2 squares or 3×3 squares while the minor symbols are always singular.

Many game studios release new games or clone up older math models for holiday releases. This game engine is brand new and unique to anything else in the developer’s library.

Over a Dozen Spin Logic Games at RTG Casinos

For those unfamiliar with the Spin logic name, it’s a trademark that RTG has held for several years but only fairly recently began to put to use. Realtime Gaming started in the 1990s in Atlanta Georgia, then moved to the Caribbean staying one step ahead of draconian legislation in an undefined legal environment for online gambling.

Soon after, they began developing slots in Australia, where the legacy games like Achilles, Caesar’s Empire, and Cleopatra’s Gold were produced. As Australian gambling law evolved, the studios were located elsewhere and RTGAsia was born. Without announcement, the Chancers RTG platform began releasing new games under the Spin Logic brand name – with Big Santa as at least the 15th title.

The RTG platform has several other holiday slots as well with the most recent before Fat Santa being Epic Holiday Party (see here), which was released in the summer of 2021. Look for titles like Naughty or Nice, The Elf Wars, Return of Rudolph, The Nice List, Swindle all the Way, The Naughty List, Snowmania, Naughty or Nice III, Rudolph Awakens, and Santastic among others.

Regular players at Casino Extreme (review) woke up today with something special in their stockings already. New players always find something in theirs. Extreme and their sister sites are the only instant-pay online casinos for the USA, according to reports.

With Christmas only a few weeks away, Dutch online casino

October brings in $1.7m in online gambling and sports betting revenues for Connecticut

Yggdrasil has launched the latest online slot title from