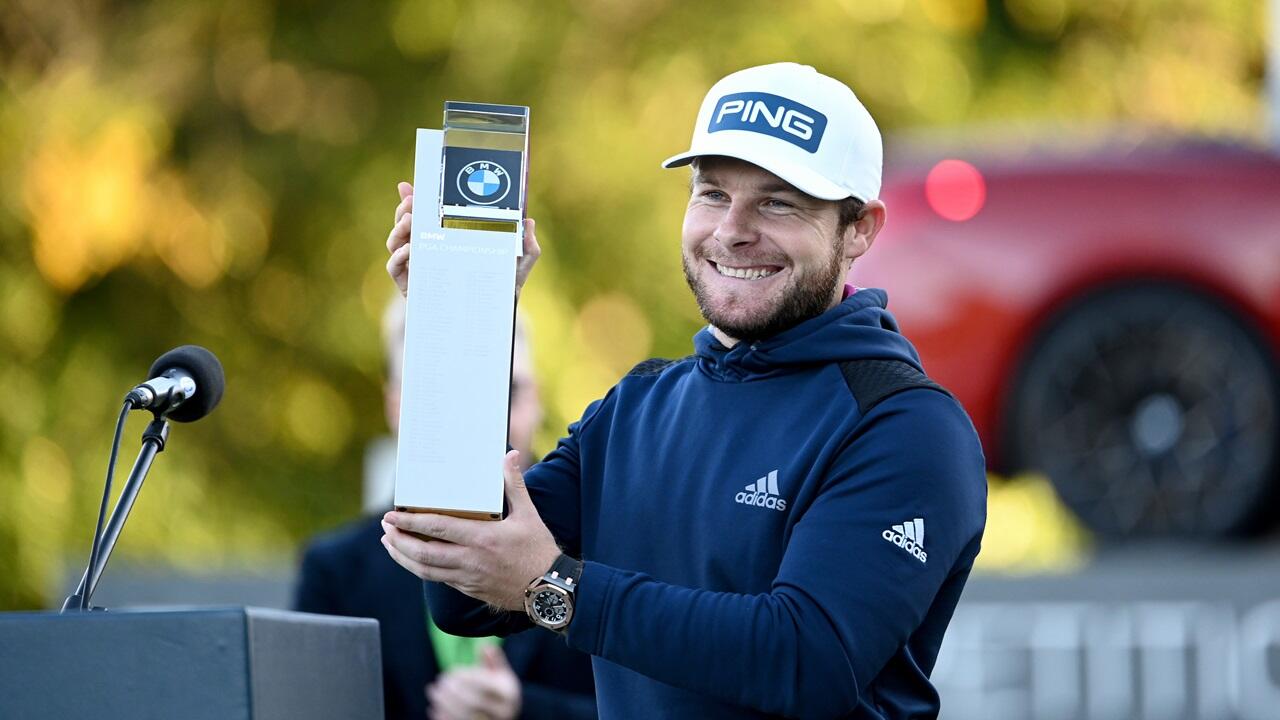 Tyrrell Hatton was largely friendless in the market prior to this year’s BMW-PGA Championship but he was the only player to trade at odds-on throughout the event and he won easily in the end by four strokes.

The 28-year-old Englishman opened up at [18.0] but, after drifting throughout the week, he was a solid [22.0] chance before the off, having touched as high as [24.0]. Having led after the opening round and trailed by a stroke at halfway, Hatton was three clear and odds-on with a round to go. A couple of players threatened but victory was never really in doubt once he’d birdied three holes in-a-row around the turn.

Victor Perez, who played in the penultimate group on Sunday, was matched at a low of [2.3] when he drew alongside Hatton after playing his first seven holes in four-under-par but he ran out of steam on the back nine. Andy Sullivan was matched at [300.0] before he teed off and hit a low of [7.8] following a sparkling run in round four that saw him get to within a stroke. But he bogeyed the 15th.

Having made big moves on Friday morning in round two, Shane Lowry and Matthew Fitzpatrick were matched at lows of [2.5] and [2.2] respectively but, after they entered the weekend tied for the lead, both fired over-par rounds on Saturday. Fitzpatrick rallied early on in round four but neither man ever looked like winning after their dismal third rounds.

This was Hatton’s third win in his last 13 starts and it moves him up into the world’s top-10.

Dramatic finale at the Shriners

Over in the States, the wind didn’t cause as much havoc in the final round as I thought it might but we were still treated to a dramatic finale, although somewhat bizarrely only one man traded at odds-on there too.

With joint leader and strong favourite with a round to go, Patrick Cantlay, folding like a cheap suit early on in round four, the other joint 54-hole leader, Martin Laird, took control. The 37-year-old Scot started nicely enough, playing the first seven holes in two-under-par but he needed to hole some really long putts on his way in after that and he needed this outrageous stroke of luck at the par five ninth too, having just bogeyed the eighth.

This was almost impossible.

A contender for shot of the season from Martin Laird.

The caption on the tweet above says contender for shot of the season, and it was brilliant, but there’s so much luck involved in a shot like that too. It was the epitome of a hit and hope.

I was really impressed with the way Laird managed his game after that until the 16th green. He made a scruffy bogey at 10 but he seemed in control with birdies at 13 and 15 and he was matched at just [1.2] when his second shot found the par five 15th green. He finished poorly after that though and anyone that backed playoff protagonists, Austin Cook or Matthew Wolff, has every right to feel slightly aggrieved.

Laird left his eagle putt 16 feet short on 16 before missing his birdie attempt and his par three at 17 needs to be seen to be believed.

A roller-coaster par for Martin Laird.

He maintains a 1-shot lead with 1 to play.

Having performed that minor miracle, a par at the last would have seen him secure the win (and let me finally get to bed!) but he made a Horlicks of that and after a messy bogey five, we were into extra time.

With the sun setting fast, all three playoff protagonists parred the 18th before Laird holed a lengthy birdie putt at the par three 17th to take the title.

It’s felt like a really long week with little reward. My four pre-event picks all missed the cut but I had a tiny bet on Hatton at halfway at Wentworth at [4.6] and having backed a few players form off the pace (see In-Play Blog) before round four, trading to a profit was simple enough.

Perez was the only fly in the ointment yesterday and I backed him on the back-nine at around [6.0] to ensure a profit regardless of the result. But having backed Andy Sullivan at a juicy [230.0], victory for him would have been lovely. Or even trading a bit lower.

The Shriners was a really messy event and I backed quite a few in-running. Laying some of my pre-event Bryson DeChambeau wager back after round one funded most of it and trading the winner last night helped too but a win for either of the other two playoff protagonists would have been a much better result.

Cook looked over-priced for much of the back-nine and, had his birdie attempt dropped on the 72nd hole, I’d have made a nice profit on the tournament. In the end, I was happy enough to accept a small loss.

Laird was winning for the first time in seven years and he was also winning his second Shriners title, having won the 2009 edition in extra time also. He was the second two-time winner in-a-row after Kevin Na had won the title 12 months ago and both men have also finished second at TPV Summerlin.

It’s a tricky event, that often goes the way of an outsider, so backing previous winners at triple figure prices is not a bad tactic.

Having got off the mark on the European Tour with back-to-back wins at the Alfred Dunhill Links Championship in 2016 and 2017, we could have all been forgiven for pigeon-holing Hatton as merely a links specialist but there’s so much more to him than that.

Hatton doesn’t have any obvious weaknesses but his big strength is his touch around the greens. Time and time again he ranks highly for scrambling and nobody got up-and-down more than him at Wentworth last week.

Good scrambling is essential at tree-lined Augusta, where in truth, Tyrrell doesn’t yet have the greatest of records, but it’s only a matter of time and given his current form, odds of around [50.0] look more than fair for next month’s US Masters.

It’s noticeable that all of Tyrrell’s last three victories on the European Tour have come at tree-lined tracks and, with figures reading 10-3-19-6, he also has a terrific bank of form at the Club de Golf Chapultepec in Mexico, which hosts the WGC Championship. He’s far more reliable than many of the players trading at much shorter and, if he holds his form over the next few weeks, he can only get shorter.

The European tour moves back up north for the brand-new Scottish Championship and the PGA Tour stops in Nevada with the Shadow Creek Golf Course stepping in to host the CJ Cup – an event usually played in Korea. I’ll be back tomorrow with my previews.

Are the Lakers worthy

PSG must beat Leipzig; will Bayern and Liverpool stay perfect?

This week is now over the halfway point of the Champions

Betting against the GOP looks to be the value bet in Georgia – politicalbetting.com

Make no mistake the runoff election