Caribean Boy can turn up the heat at Ascot


The feast that is Christmas racing is only just around the corner, but before then we have a very competitive card at Ascot on Saturday to work through. Coole Cody did his bit for the cause by winning at a Betfair SP of 16.25 for this column last week and, with a bit of luck, we might be able to find another winner to bolster the kitty prior to the festivities.

The 15:00 Howden Silver Cup Handicap Chase is a fiercely-competitive contest and my preference is for one of the youngest horses in the field, the Nicky Henderson-trained Caribean Boy.

The seven-year-old made a fast start over fences, winning two of his first three starts in that sphere including a Grade 2 novice chase at Newbury in November 2020 when he got the better of the smart Fiddlerontheroof.

In terms of his more recent runs, two of his last three runs have been quite promising efforts in deeply-competitive handicap chases at the Cheltenham Festival and Cheltenham’s November meeting. On both occasions, he shaped better than the bare result and as though this longer trip will suit.

Most recently, soon early jumping errors very much put him on the back foot in the Paddy Power Gold Cup, but yet he recovered to be beaten by only 8¼ lengths in what was a strong renewal of the race.

Considering the promise he showed in both those runs, it is quite remarkable that the British handicapper has dropped him a total of 8lb for his last three runs. This follows a trend of what has seemed to be remarkably generous treatment that the British handicapping team have been dishing out to British-trained runners this season, presumably with a view to addressing perceived over-rating of British horses relative to those trained in Ireland.

The combination of this longer trip and first-time cheekpieces promise to show him in a better light and a big run could well be forthcoming from him. 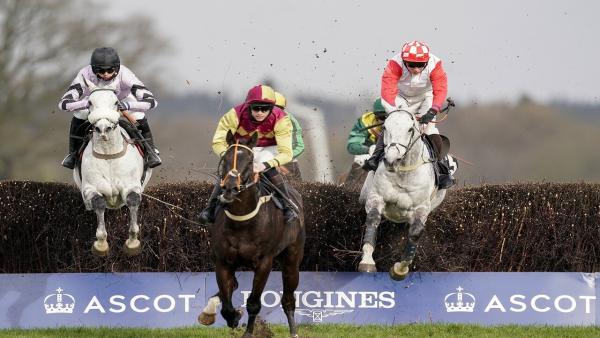 The concluding 15:35 Betfair Exchange Trophy Handicap Hurdle has attracted a field as competitive as it should given the size of the pot on offer. Having examined the field, it is a race that has all the ingredients to produce a result that always fills British racing with joy and cheer, an Irish-trained winner of a valuable handicap hurdle in Britain!

The Irish may only be represented by a single runner, the Pat Fahy-trained Drop The Anchor, but he looks to have a very good chance. The progressive seven-year-old won the Ladbrokes Hurdle at the Dublin Racing Festival last February, which is traditionally one of the most competitive handicap hurdles in the Irish racing calendar. His victory that day was characterised by a very strong finish, stamping him as a strong stayer at the trip.

While he effectively had to race off a 15lb higher mark in the County Hurdle at the Cheltenham Festival on his next start, he shaped as though such a mark would not be beyond him on another day. He was upsides the eventual winner Belfast Banter soon after the second-last flight, but was squeezed out and shuffled back soon after. Having been left with plenty to do and not much time left to do it, he finished as well as anything up the run-in to be beaten just 3½ lengths.

Having had a pipe opener on the Flat in which he ran particularly well to finish third in a maiden at Navan in October, he should be spot on for this contest in fitness terms. This course and distance promise to suit him better than that of the County Hurdle and it wouldn’t at all surprise to see him run a big race.