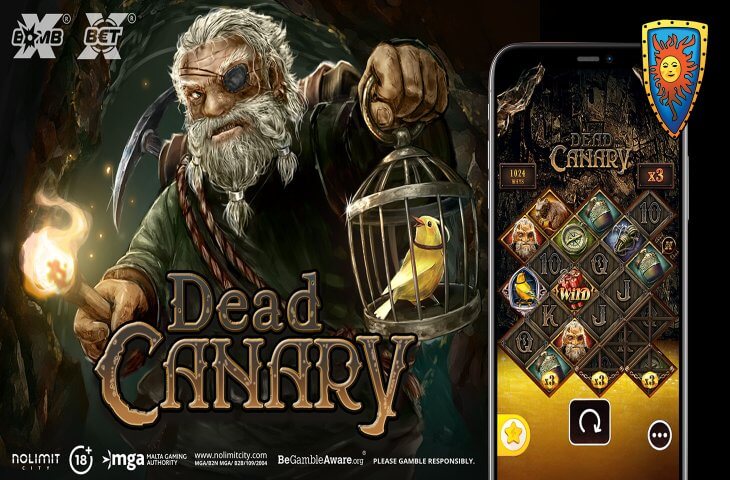 Casino game studio Nolimit City have had something of a solid 2022, in the process releasing games such as Folsom Prison, Karen Maneater and last month’s Rock Bottom, aim to end the year on a high with the release of their latest slot game, Dead Canary.

Indeed, Nolimit City who were acquired by Evolution Gaming earlier this year in June, are gearing up to wrap up the year on a massive high and dig deeper than they’ve ever been before, with Dead Canary.

Dead Canary loosely follows the events of Fire in the Hole and Misery Mining – taking place deep underground inside the mythical ‘Federal Beer Reserve’. The provider proclaims, “After successfully finding the perfect brew recipe for the perfect beer, it’s now time to accompany our favourite angry dwarf on his quest for true love….”

The slot’s charming theme along with the sleek art direction Nolimit players have become accustomed to combine perfectly in this highly engaging, action-packed slot.

The slot’s base game plays on a 3-4-3-4-3-4 layout and introduces a significant twist to the traditional collapsing avalanche mechanic in the way symbols fall onto the reels. The fresh is then merged with the familiar, with well-known mechanics such as Wild Mining, xBomb®, and xBet® making an explosive impact on the game. When paired with the fantastic free spins mode, Nolimit has created a unique experience that has all the ingredients to become an instant classic.

The slot focuses its spotlight on the endearing yet innovative ‘Canary Freespins’. The dwarf is now located in the “Federal Beer Reserve” and greedy as he is, he’ll try and collect as many coins and treasure as possible even though it will mean he’ll have to sacrifice his canaries. The 3-2-1 collector game is bound to keep players on the edge of their seats.

The dynamics of the bonus change depending on which type of bird triggers the bonus, and where they’re placed – creating a unique experience each time. One thing remains consistent though, those birds must be blown up!

In typical Nolimit fashion, Dead Canary is extremely volatile. Whoever said life in the mines had to be miserable? Dead Canary is all about the love. The takeaway advice given by the Dwarf is “Happy Wife, Happy Life!” – and following that advice will secure Dead Canary’s maximum simulated payout of 65,000 times the base bet!

Per Lindheimer, Product Owner at Nolimit City said: “We thought our favourite angry dwarf deserved a happy ending. Such a journey won’t be easy though – but we’ve made sure it’s incredibly fun and entertaining. Stock up on tonnes of explosives, heaps of treasure, and a handful of trusty old canaries to scope out those dusty mines.”

Simon Wright has been both a player and an observer of the online casino industry for over 15 years. His knowledge of the online casino industry – to include sports is massive. Not many folks have the experience or his knowledge about online gambling. His adoration of football is also noted. He has painted his house blue (Chelsea) and annoys his neighbors with local football songs on game days.

Las Vegas Strip Rated One Of Most Photographed Roads In US