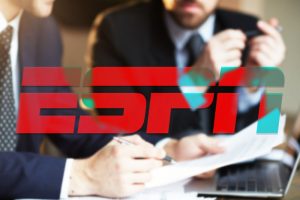 In the latest of a host of sports betting-related news, ESPN announced Monday that it has entered into two separate multi-year agreements with Caesars Entertainment, Inc. and DraftKings Inc., building on previous partnerships with the two leading gambling companies.

The two newly penned deals will see ESPN link its website to the sportsbooks operated by DraftKings and Caesars’ sports betting partner, William Hill, in a co-exclusive manner.

In addition, DraftKings’ agreement with the sports network makes it its exclusive daily fantasy sports provider, powering fantasy sports content on some of ESPN’s most popular shows.

As part of the deal, Caesars has deepened its relationship with ESPN as its exclusive supplier of odds data across the network’s television and digital programming. The casino giant and ESPN first announced their partnership in May 2019.

The newly launched facility occupies 6,000 square feet of space at the LINQ and features three studios with 12 cameras, including two exterior robotic ones. The studio is the sports network’s first to have been built in a manner that enables it to fully support native 4K technology.

The recent deal with ESPN will also see Caesars Sportsbook by William Hill become a sponsor of ESPN’s fantasy products, it became known.

A Next Significant Milestone

ESPN announced its multi-year deals with two of the leading operators in the US sports betting space just days after the return of the NFL, America’s most popular sports league.

Commenting on the two agreements, Mike Morrison, Vice President of Business Development & Innovation at the sports network, said that these “collectively represent the next significant milestone for ESPN to diversify our exposure and deepen our commitment in the sports betting space.”

Mr. Morrison went on to say that they

“began growing the experience through content, followed by odds utilizing William Hill’s sports betting data and a new state-of-the-art studio facility in Las Vegas through our deal with Caesars, and now with the addition of DraftKings, we are bringing together the sports media leader with two of the top brands and best products in the segment.”

Caesars’ CEO, Tom Reeg, added that their relationship with the major sports network continues to deepen “with the ability to directly link to sportsbooks from our partner William Hill, from ESPN’s digital platforms” and that ESPN’s “unparalleled reach” offers a transformational opportunity for sports fans and enthusiasts to “engage and wager at their fingertips.”

DraftKings co-founder, Chairman, and CEO Jason Robins said that the start of the new NFL season was the perfect time for his company to be launching this integration with ESPN and deepen its relationship with the sports network.

The four investment banks that advi

On the heels of the launch of another Reel

This week, players at Intertops Poker have

In the southern American