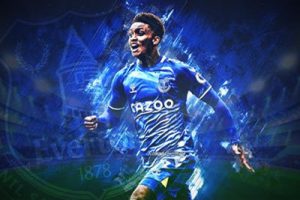 On Monday, December 6th, 2021 Everton took on Arsenal from Everton’s home stadium of Goodison Park located in Liverpool, England. Everton has been desperate for points as they have been suffering through an 8 – game winless streak lately.

During the 2nd – minute of the first – half of injury time Arsenal’s aggressive and attacking midfielder, Martin Odegaard, volleyed in the first goal of the match. This put Arsenal up with a score of 1 to nil, and Arsenal was well on their way now to jump back in to 5th – place in the standings.

Everton’s Brazilian forward, Richarlison, unfortunately had 2 – goals ruled out on video reviews due to very slight counts of offsides. The first of those occurred in the 43rd – minute of play when Richarlison headed in a potential goal, and the second one happened in the 57th – minute of the match when Richarlison booted in a low shot that was also ruled a no – goal because of an offsides video reviewed decision.

Everything was pointing towards an Arsenal win until the 79th – minute of the contest when the sure – footed winger of Everton, Demarai Gray, struck the crossbar of the goal on s blast of a shot, and Richarlison was there once again to head in the loose change for the equalizing goal.

With the game tied up at 1 to 1 entering stoppage time Everton’s chances of ending their winless streak were dwindling by each and every second. Then approximately 2 – minutes into stoppage time, Gray cut to the inside from the left, and he absolutely drilled the ball hard as can be with a strong right – footed shot that ultimately banked in off of the inside of the post to put Everton in front of Arsenal with a score of 2 to 1.

That eventually ended up being the final tally of the match as Everton defeated Arsenal 2 to 1, and more importantly they ended their wretched 8 – game winless streak on Monday. Gray was the hero of the football game, and he celebrated his late goal by tearing off his jersey and walked into a section of screaming fans to the side of the pitch. This victory for Everton pushed them 8 – points clear of the relegation zone in the English Premier League as well.

“It was a crazy moment, my best moment here so far,” says the Everton winger Demarai Gray. “It was important to get that win. We have gone through a bad patch but we stuck together.”

“It is clear — when the fans, the players, everybody sticks together, we are stronger,” the manager of Everton Rafa Benitez proclaimed. “The reaction of the team to the goals that were disallowed and conceding a goal at the end of the first half, we still scored goals and reacted. Every player and fan is expecting that. Everybody is really pleased and hopefully it is the right step forward.”

“It’s hard to say exactly what happened,” Arsenal’s attacking midfielder, Martin Odegaard, explained. “We have to do better when we have that lead. We stopped playing and gave them the game they wanted to play.”

Playtech has announced another expansion in its efforts t

Formula One legend Eddie Jordan has pulled into the pits

Playtech has fortified its partnership with the former En

Swinnt Extends their Presence in Germany

The first movie by the Rocky movie franchise was release