Cooper has been a breath of fresh air

It’s fair to say Nottingham Forest were lacking any kind of identity under Chris Hughton and after a draw against arch-rivals and seven defeats, a change was long overdue.

Fast forward six games and Forest fans can barely believe the drastic turnaround and belief Cooper has instilled within his squad. After five wins and a draw, Forest are the most in-form team in the league – above the likes of Bournemouth and Sunday’s opponents, Fulham.

Their never die attitude resulted in one of the most dramatic matches of the season on Tuesday night, where two stoppage time goals from Lyle Taylor within 50 seconds of each other saw Forest come back from a goal behind to beat Bristol City at Ashton Gate.

Lyle Taylor had previously scored just once in his last 36 appearances for Forest – Cooper will be hoping this can spark a change in the striker’s fortunes for the remainder of the season.

Captain Lewis Grabban has really come into his own as well, scoring five goals since Cooper’s appointment – at the age of 33, he remains an integral part of Forest’s side.

Can the Serbian striker be stopped?

The antepost favourites for the Championship have started the season strongly, sitting in second place (at the time of writing), behind Bournemouth.

Fulham head to the City Ground after bouncing back from their shocking 4-1 defeat to Coventry with a 4-1 victory of their own against QPR before a professional performance saw off Cardiff City 2-0.

In a recent interview, club captain Tim Ream claims his side haven’t played anywhere near their best yet and there’s far more to come from Silva’s side this season.

That certainly must be sending alarm bells to the other teams in the league, with their leading talisman, Aleksandar Mitrovic, has already scored 13 goals, whilst Harry Wilson has three of his own this campaign.

Forest’s three centre backs Joe Worrall, Tobias Figueiredo and Scott McKenna will all be in for a tough afternoon trying to keep him quiet.

You can back the Serbian to score anytime in the match at 2.1011/10 and I’ll be surprised if he walks away from the City Ground with at least a goal to his name.

Despite both teams sitting 1st and 3rd in the league’s form, both sides have only had one clean sheet each in their last five games and are relying on their attacking options to see them through games.

Forest’s form can’t be questioned, but victories over the likes of Bristol City, Barnsley and Blackpool are far weaker opponents than Fulham, and a clean sheet looks unlikely for the Reds.

On the other hand, Fulham shipped four away to Coventry and have only had one clean sheet away from home this season against Birmingham, who have endured a poor start to their campaign.

Both teams to score at 1.804/5 is rather generous and looks to be a strong bet in this encounter. 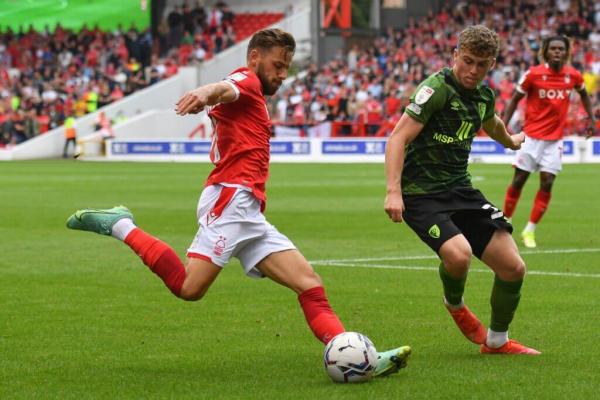 While it is likely Lewis Grabban will lead the line and will be Forest’s main chance of scoring, Cooper may choose to feature Lyle Taylor after his midweek brace. With both strikers being rather short to score anytime, I’ll turn my attention to two Forest attacking players who have been assisting for fun in recent weeks.

Brennan Johnson has been thriving under Cooper and although he has scored three goals, he also has three assists to his name. The Welshman has regularly featured down the right wing in the last five matches and his lightning pace will definitely cause Antonee Robinson issues on Sunday afternoon.

There will be no respite down the other flank for Fulham either, with on loan Philip Zinckernagel quickly becoming a fan favourite for the Reds. He’s contributed two league goals and four assists already this season and has looked to be an astute signing for Forest. The Danish winger also takes corners which is another positive for the proposed bet.

Both of these attacking wingers can be backed at 8.5015/2 to assist anytime which represents plenty of value on a day where I’m certain there will be plenty of goalmouth action.