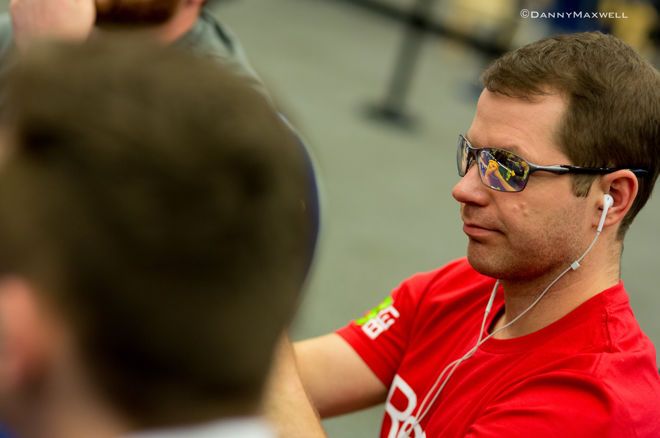 If my opponent does rip it all in, I can easily call, and I would easily call by the way. I’m not three-betting ace-king to fold. If you three-bet ace-king in this spot and fold to your opponent’s jam, even if they’re TAG, you are folding out way too often. That’s because you’re getting pot odds, and with ace-king, you’re almost always going to win more than 40 percent of the time, which is what we would need given the odds in this spot.

Anyway, my opponent winds up just calling. He’s either behind a majority of the time or has a pair. On the

flop, I pair my ace and want to bet small and frequently here, which I do by tossing out 7,000.

“Given my line, it makes my hand look a whole lot like an under pair or a queen. If my opponent thinks that, they should be bluffing frequently.”

I want to get all my money in the pot by the river, and in order to do that, I have to bet small on both the turn and river. My opponent should call frequently given he has to call 7,000 to win 35,000, so he needs to realize 20 percent equity in position.

The turn was the

, and while I said above I’d be looking to bet small again, I think this card is better checked. That’s because there’s a good chance my opponent will bet if they either improved or picked up a draw, and even if he doesn’t, I have a pot-sized bet to fire on the river. Plus, unless my opponent has me beat, chances are he’s not going to call bets on both the turn and river.

As such, I check and my opponent does bet 9,500. This is what I wanted. I do lose to ace-queen now and pocket queens, but I beat a lot of other hands. I call and I’m always check-calling every river. In this case, it was the

, which paired the board.

I checked and my opponent jammed. It’s an unfortunate spot, but it’s important to recognize what my hand looks like at this point. Given my line, it makes my hand look a whole lot like an under pair or a queen. If my opponent thinks that, they should be bluffing frequently, and that means I should be calling frequently. Is ace-king near the top of my range? The answer is yes, making this an easy call.

for a better two pair. Just like that, I was out. However, you already know I won this tournament, which meant I opted to re-enter.

For a more thorough breakdown of this hand, as well as my thoughts on re-entries, check out the following video:

Jonathan Little is a professional poker player and author with over $7,000,000 in live tournament earnings. He writes a weekly educational blog and hosts a podcast at JonathanLittlePoker.com. Sign up to learn poker from Jonathan for free at PokerCoaching.com. You can follow him on Twitter @JonathanLittle.

Mike Matusow bet a large percentage of his bankroll tha

As Elections Loom, What’s the Outlook for Online Gaming and Poker?