None of the five outsiders can be described as spring chickens. They have an average age of 38.4, with Cink the oldest of the five at 47. Backing a veteran outsider in the ZOZO Championship makes sense…

Look to Lefty to shine at Sherwood

Backing one that’s won 11 times in his native California, finished second in a WGC event less than three months ago and who won only last week, for the second time in four starts, makes even more sense. Step forward Mr Phil Mickelson, who last week won his second Champions Tour event. He’s now played on the veteran’s tour twice since turning 50 at the end of June and he’s won both events – by four and three strokes.

As detailed in the preview, this week’s venue, Sherwood Country Club in California, hosted Tiger Woods’ Hero Challenge event between 2000 and 2013 but Woods and Mickelson never really got on when in their pomp so Phil only ever got invited to play here once. With rounds of 68-74-68-68, he finished 10th in 2002 but he has at least played it competitively. Something very few in the field can say.

Dave Tindall makes a compelling case for another pair of big outsiders – Kevin Streelman and Cameron Champ – and I was intending to put up Jason Day, who drifted to a ridiculously big 129/1130.0 yesterday following his withdrawal in round four last week with a neck injury.

Day was in with a chance of winning before the final round started on Sunday and if he’s OK to play, with course experience under his belt (played here three times previously), he could go well but he’s shortened up dramatically overnight so instead I’m plumping for a younger more consistent player in the shape of Sebastian Munoz at 149/1150.0.

Money to be made with Munoz

Having won last year’s Sanderson Farms Championship, the 27-year-old Colombian hasn’t stopped climbing the world rankings. Having played all last season’s FedEx Cup Playoff events and having finished ninth at Shadow Creek last week, Munoz is up to a career-best 63rd in the world and he’s not finished yet. 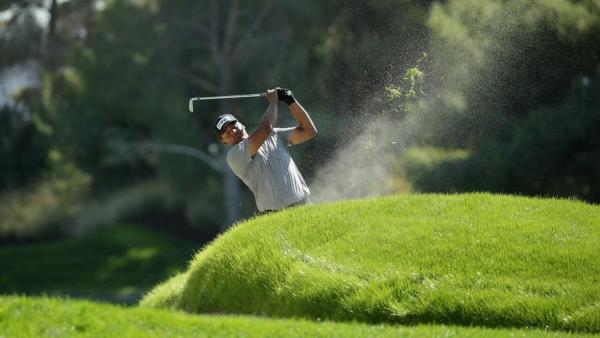 With five par fives and five par threes at Sherwood, the fact that Munoz ranks as high as ninth for Par 5 Performance on the PGA Tour so far this year and as lofty as 30th on the short holes is a big plus and he shouldn’t be trading at almost twice his best High St price of 80/1 after yet another strong performance last week.

Over at the Italian Open, which I’ve previewed here, multiple event winners are common so I’ve been waiting all week for the 2015 winner, Rikard Kalberg, to drift out to a triple-figure price but he’s refusing to budge. That’s perhaps not surprising given he’s finished 14th in each of his last two starts so I’ll instead turn my attention to an even bigger longshot and a two-time winner of the title – Gonzalo Fernandez-Castano.

Birthday boy can putt his way into contention again

The veteran Spaniard claimed this title in both 2007 and 2012 and the stars might just be aligning for a third title tilt. Gonzo’s form has been encouraging of late with a 14th place at the Portugal Masters the highlight, thanks to a huge improvement with the putter. After weeks of poor putting, Gonzo gained nearly five strokes with the flat-stick in Portugal (ranked fifth) and he gained more than six in Scotland last week, where he ranked fifth again for Strokes Gained Putting. Having turned 40 just over a week ago, we have the added bonus of a significant birthday stirring some momentum and 199/1200.0 looks big.

Hard to see us get four goals in Donetsk Shakhtar Donets

Sitting Priti or Priti Vacant. Will Priti Patel still be in the cabinet on the 1st of March 2021? – politicalbetting.com

These types of markets on whether X will still

What’s Next for Mike Tyson & Roy Jones Jr? Odds on Retirement and Next Fight

Will Mike Tyson and R

Timeform select the best bets at Aqueduct on Sunday... ".