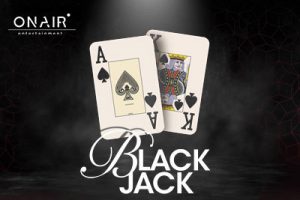 Microgaming-powered live dealer online casino provider On Air Entertainment has announced the launch of their first live table game. The Riga, Latvia provider has made its first splash with Standard Blackjack in an effort to shake up the industry.

It took the new company less than a year to go live after announcing its intentions to change the live dealer online casino environment in December 2020.

Where once there were only two or three live game providers, there are now literally dozens of studios providing regionally specific games from blackjack to fantan and Andar bahar with native language tables and dealers for players almost everywhere around the globe.

The studio’s first blackjack environment is located in On Air’s state-of-the-art Latvian studios with seven English-only tables open for play. The provider is on cue to launch a second environment 3 additional tables before the end of the month and another 10 tables by the end of the year, entering 2022 with twenty live tables offering action 24/7.

The studio’s roadmap calls for rolling out additional languages beginning December 14th and the debut of a third studio environment with an entirely different look and feel, featuring roulette sometime in January.

Starting from scratch last December, the team of industry veterans behind On Air Entertainment now has 200 employees spread among four operations hubs and their product has received regulatory approval from arthritis in Malta, Isle of Man, and Latvia with more certifications expected to expand their global reach in the coming months.

Describing the first offering, the company stated that the game is focused on players first with streaming around the clock for any device, and offers language-filtered player chat, one-to-one customer support, and special features to speed up gameplay.

Deal Now is a feature that lets players reduce the amount of time between hands by shortening the betting phase and a “pre-decision” feature allows for certain actions before the turn.

Game enhancements include optional side bets for 21+3 and Perfect Pairs with potential payouts of up to 100x the player’s stake. Multi-seat additions and bet behind functionality are said to be in the works for release soon.

On Air Entertainment Managing Director Andres Rengifo, said: “We set out with ambitious plans to bring a brand-new studio and a premium live casino product to the table in less than a year, and have succeeded in doing just that – an incredible achievement for our business. It’s thanks to the unstoppable drive, passion and unity our talented team has shown that we have accomplished in just 11 months what has taken others years to achieve!

“Looking ahead to the new year, we’ll be keeping up the momentum with the release of seven classic and unique titles throughout 2022. And with plans to establish a presence in multiple regulated markets, including the UK and Greece in early 2022, there’s no chance of us slowing down!”

Flutter Stock Could Be Undervalued, Says An Analyst

In Singapore and a project that was due to increase casin