New England Revolution’s Carles Gil, top, celebrates with teammate Andrew Farrell, below, after Gil scored during the second half of an MLS soccer match against the Vancouver Whitecaps, Wednesday, July 17, 2019, in Foxborough, Mass. The Revolution won 4-0. (AP Photo/Steven Senne)

The soccer calendar never rests and no sooner have we wrapped up another busy international break, do we return with the MLS Cup Playoffs kicking off this weekend. New England and Colorado have earned a bye, but 12 other teams will play in Round One of the playoffs with a hope of reaching the Conference Semis.

Two games will be played on each of Saturday, Sunday, and Tuesday this round.

Let’s take a look at the MLS Cup odds for all 14 teams who reached the playoffs, plus the odds and best bets for each of the six Round One matchups.

Odds as of Nov 19 at DraftKings

While I definitely scattered a few bets on a handful of teams prior to this MLS season, the New England Revolution were one of my highest conviction bets. I’m sitting on Revs’ tickets at +2500 and +2000 odds from back in March and April.

I may not have foreseen them having a historic year, but I did think they’d be in a strong position come playoff time. So far, they’ve done nothing to make me come off that belief. If anything, I feel more strongly about Bruce Arena’s side after a 22-7-5 season, 12-3-2 home record, all-time points record and Supporters’ Shield win. They have all the pieces. Their best players have been their best players. They have no major injuries. They have a world-class keeper in Matt Turner. Their coach has won more MLS Cups than anyone else, and more than any team, minus the Galaxy. They’ll be rested in the Conference Semis. After 23 days off, I’m banking that Arean has the experience to keep them focused in that time.

No matter if it’s NYCFC or Atlanta in the MLS Cup Playoffs bracket, it won’t be easy. But the Revs won 2-1 against New York this season and 2-0 against Atlanta. If they advance I believe they are far superior to any of Nashville, Orlando, Philadelphia, or New York Red Bulls.

The West looks a little more wide-open. Three teams (SEA, SKC and COL), had a chance at first in the conference on Decision Day. They all have a shot at reaching MLS Cup now.

Seattle at home to an RSL squad who were seconds away from not being here should advance. The Whitecaps, one of the league’s hottest teams could pull an upset. The Timbers, at home, have been money this season and are my pick over the Loons in Round One.

From there, Portland may have too much star power for Rapids. Seattle, are well Seattle. At home to a Whitecaps team with little playoff experience, you have to pick the Sounders.

Seattle has played in four of the past five finals, winning twice. A final without the Sounders would almost be weird at this point. It may also be refreshing. The Timbers have also reached the big game twice in the past six years but not since 2018, losing 2-0 to Atlanta.

Winning in Seattle won’t be easy, but Portland did just do it in their last meeting (2-0) in August.

I still think the Revs lift MLS Cup on December 11, but if you’re looking for a little more value, Portland at current odds of +2000 are my “upset” pick as finalists. Both of these numbers have adjusted from earlier this week when New England was +333 and Portland was +1600.

If you want to see my entire bracket see the image below, followed by odds and picks for each Round One match. 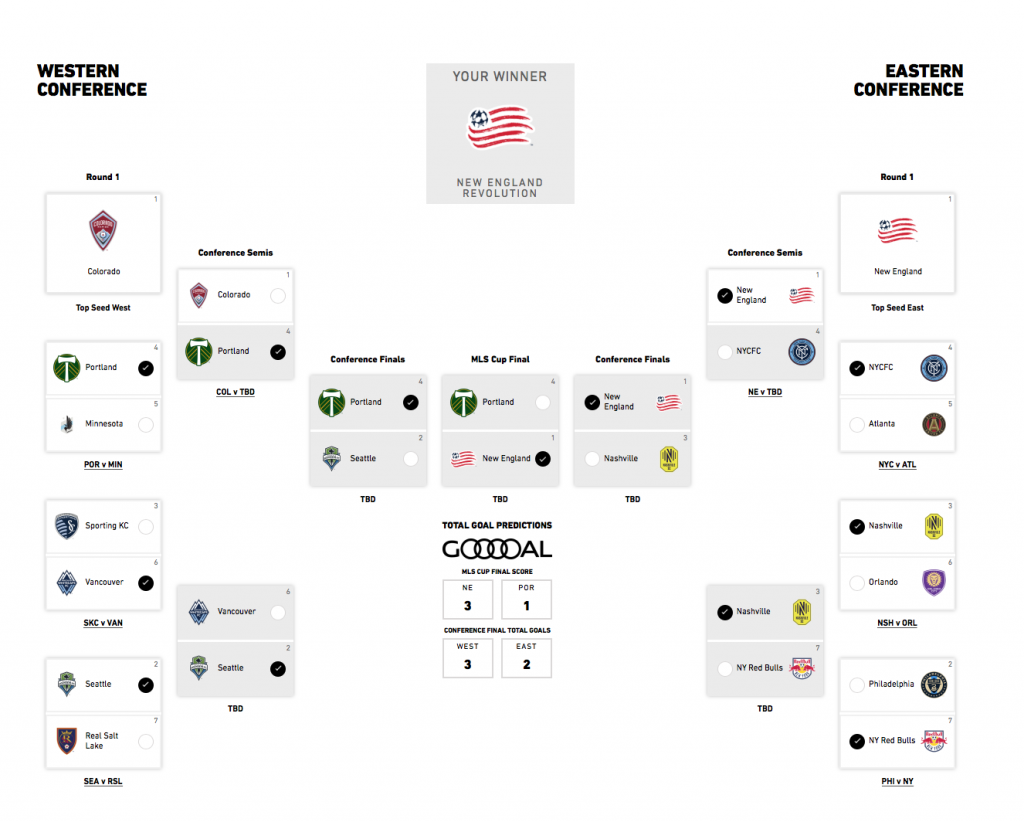 MLS Cup Playoffs Round One Odds

Odds as of Nov 19 at DraftKings

On this edition of my #SchwartzOnSports podcast at @nysportsday, I’m joined by @NewYorkRedBulls defender Sean Nealis to talk about Saturday’s #MLSCupPlayoffs game at Philadelphia. #RBNY https://t.co/93BlfBVL7Y

That trend played out in all three of their meetings this season with Philadelphia winning 1-0 at home in their first meeting. Two 1-1 draws followed in New York in the next two.

Now in the playoffs where the margins of error will be super tight, I see another close, scrappy contest between two teams high in pressing and tackling stats. A draw or another Under.

Over in the West, third place SKC will host sixth-place Vancouver at 5:00 pm EST.

SKC had a shot at a first-round bye but came up short (1-0) against RSL on Decision Day. It was their third-straight loss to close out the regular season. Still, it was an impressive season, where they scored 58 goals, second only to New England’s 65.

The West was a higher scoring conference this season and both of these teams reflect that. SKC was 21-13 to the Over, while Vancouver was 20-14.

The Vancouver Whitecaps are in the playoffs. It’s been quite the ride. Spoke with sporting director Axel Schuster, director of recruitment Nikos Overheul and, of course, interim head coach Vanni Sartini:

“Well, the first day my goal was not to screw up.”https://t.co/fSe7HkXFgT

Both meetings this season were won by the home team, SKC 3-0 and Vancouver 2-1. The Whitecaps’ win in October was their first win over SKC in seven matches. Vanni Sartini’s Caps have been rolling of late though. Over the past 15 rounds, only three teams have collected more points. In their past 22 matches, they’ve lost just twice and were undefeated in their final six.

This one could be tighter than the table may make it look. Both teams scored in each of the Caps past seven matches. Bets on Over 2.5 goals would’ve cashed in 8/10 of SKC’s recent matches. Backing both to score here (-155) seems likely.

For SKC, Daniel Salloi (+120 anytime scorer odds) and Johnny Russell (+120) were both in Golden Boot contention. If SKC are to score, it’s likely to come from one of those sources, especially if Alan Pulido is unable to go. He returned to training this week and could make an appearance. Russell scored in 9/11 games to end the season.

I can see goals from both sides ansd the Caps at least pushing this to extra-time. I’ll take them as an upset pick to advance too.

Get a $1,001 Free Bet with Caesars Sportsbook Promo Code This Week

On Sunday, it’s fourth (NYCFC) hosting fifth (Atlanta) in an Eastern Conference Round One match at 3:00 pm EST. Both teams finished with 51 points this season.

Both meetings were tight this year. NYCFC won 1-0 at home and the teams split the points in Atlanta 1-1. There have only been ten all-time matches between the two and a road team has won just once.

The Five Stripes were solid on the road this season. They had the fourth-best road record in the East.

Josef Martinez has been nominated for the MLS Goal of the Year alongside 15 others. The strike put forward was his Van Basten style effort vs. Cincinnati on 7 November. 🔥🚀🇻🇪pic.twitter.com/oI6BZ5iQZ0

The Loons were poor away from Allianz Field this year at 3-7-7. They scored just 18 goals while giving up 30. Meanwhile, only two teams collected more points at home than the Timbers this season. Both came from the East, New England, and Philly.

The Timbers were 11-2-4 at Providence Park, however, Minnesota handed them one of their rare home defeats this season. Minnesota won 1-0 in Portland and then also 2-1 in Minnesota. The Loons have won each of the past three meetings with the Timbers and are 6-1-0 in their past seven.

“I’m very excited for playoffs. I believe in our team.”

Jarek Niezgoda on increasing his minutes, goal tally and looking ahead to the playoffs. #RCTID pic.twitter.com/95qdyXXV75

The history in this matchup is against Portland and the Loons come into this MLS Cup Playoffs match on a 3-2-1 run.

But Portland is hot themselves. Even in a meaningless Decision Day match, they still won 3-0 at home to Austin. That’s three straight Ws to end the year. They’re 10-1-3 in their past 14.

I’d lean to the home win. Though Timbers’ matches are often high-scoring. They scored 56, but allowed 52 on the year and were 22-12 to the Over. In fact, they’ve allowed the most goals of any playoff team. With Emanuel Reynose pulling the strings for the Loons, they certainly can find the scoresheet. Portland has scored in 16/17 home matches this year and has scored multiple goals in 12/17 home matches as well. We could see a few goals.

No team allowed fewer goals than Nashville’s 33 this season. That was tied with the New York Red Bulls and Seattle for tops in MLS. No team had more draws (18) than Nashville either. That was five more than the next closest team Vancouver with 13. It was six more than a host of others who had 12, one of which was Orlando. It was also tied an all-time league record for draws in a season.

Nashville was also the only team to not lose a single home match all year at 8-9-0. They scored 35 and conceded 18 at Nissan Stadium.

There’s a very short history between these teams, just six games, with four of those ending in a draw. All three this year (1-1, 2-2, 1-1) were also drawn. Both teams have scored in all six overall meetings.

Orlando wasn’t bad, but they weren’t great either down the stretch. They won just three of their final 12 and just one of their last five. They did score in each of their past 11.

Look, if you had blindly bet the draw with Nashville this season you’d have made a pretty penny. Not only did they literally draw more than half of their games, they also drew seven of their final nine matches. They lost once away to a strong Philly side and won once to an awful Cincinnati squad. Everyone else … draws.

Why should any of this change now.

The Sounders stumbled to the finish line and eventually relinquished the top spot in the West. They went winless in their final six games after winning 8/10 previous matches. Four of those final six came on the road. At home, Seattle was 8-5-4 this season. Seattle also played out the end of the season without several of their star players.

But the likes of Raul Ruidiaz, Nico Lodeiro and Jordan Morris should all feature here. Getting Morris back after a season off is basically like making a blockbuster late-season transfer, albeit one who may be a little rusty, but fresh.

RSL was hot and cold all season. Entering Decision Day they were on the outside looking in for the playoffs. They waited until the last minute, basically the last second/kick of the season to qualify. It came from a 95′ minute stoppage-time winner by Damir Kreilach in a 1-0 win over SKC. That sent them over the Galaxy for the final spot in the West. Now they face Seattle. The team that their ex-head coach Freddy Juarez left for this season to become, a … assistant coach. As if they wouldn’t already be all in for this one, that’s an interesting wrinkle.

“At the end of the day, it’s what this team deserved.”

The teams split their two meetings this season, with Seattle winning 2-1 at home, followed by a 1-0 home win for RSL. Three of their past four have seen both teams scoring and three or more goals. A road team has only won twice in their past 13 head-to-heads.

RSL doesn’t play to many draws, just six this season. They had no draws in their past 19 matches. On the road, their 33 goals allowed was second-worst in the West. An RSL upset would be a great story and the Sounders haven’t been in great form, but I just can’t go against Seattle.

The summer transfer window was unlike any other, see all

Melbourne Victory have acquired the services of United St