On Smarkets the chances of the Democrats taking both the House and Senate move from 20% to 30% – politicalbetting.com 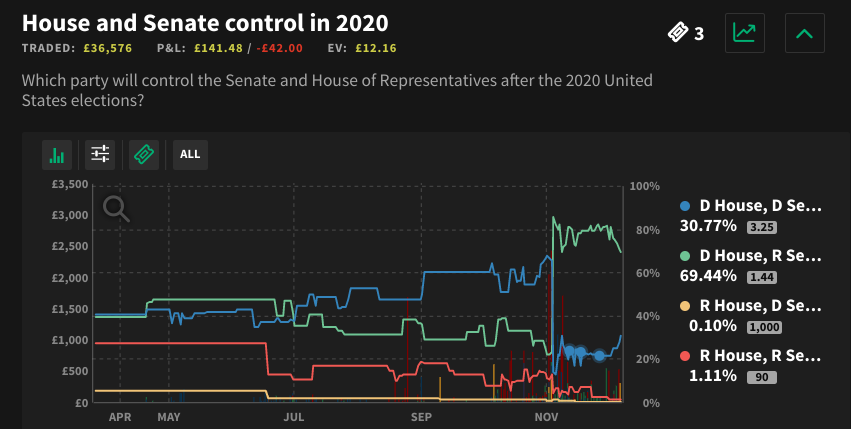 We are now just four weeks away from the Georgia runoffs which will decide whether it is the Republicans or Dems who will control the Senate an outcome either way that have a huge impact on US politics over the coming years.

The polls have showed both races getting tighter and last night there were the TV debates in which the big highlight was Democrat Jon Ossoff debating an empty podium which allowed him to repeatedly blasting .David Perdue  for refusing to participate.

What was striking is that the anchor Russ Spencer, who moderated the debate, introduced the candidates, with the camera showing an empty podium as he introduced Perdue. He explained that Perdue “declined to participate.”

This provided a real opportunity for Ossoff to hit his opponent hard saying Perdue did not attend the debate because he did not want to “incriminate himself” a reference the Republican’s controversial record of trading stocks throughout the coronavirus pandemic.

I have to say that I was hugely impressed with the Ossoff who looks as though he could become a huge player in US politics if he can win the January 5th election. The contests are getting a mass of TV and media coverage across the nation which will help with name recognition.