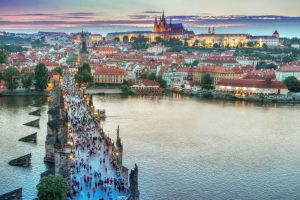 Slot machines could completely disappear from Prague as city leaders are looking to purge the capital of the Czech Republic of “the most addictive” form of gambling.

Prague lawmaker voted earlier this week to approve a new decree calling for a total ban on all gambling machines around the city. The draft legislation is set to be discussed and voted on by the City Council today.

Under the recently introduced bill, all mechanical, electromechanical, and electronic games in Prague should be removed from the city’s gambling halls. These include slot machines and video lottery terminals, among others.

The bill does not cover table games. If the legislation gains the necessary support from the Prague City Council today, it would result in the closure of all slots-only gambling venues around the Czech capital. Luxury casinos that service mostly tourists and offer table games will remain operational.

The total ban on gambling machines will see Prague lose a big tax payer. According to official stats, the city’s gambling establishments generated CZK690 million (approx. $30.7 million) in revenue from slot machines last year. Local news outlets report that city leaders are yet to come up with a plan on how to offset the losses.

Slot Machines Bad For The City

Commenting on the looming slot machines ban, Prague City Councilor Hana Kordova Marvanová said that the gambling devices are “a bad sign for the city because they are the most addictive and are linked to all sorts of crime, so it is both a social and a security risk.”

The slot machines ban proposal is the third gambling-related decree discussed by Prague city leaders in the past decade. Prague Mayo Zdenek Hrib noted that previous efforts to restrict gambling across the city were not particularly successful as gambling operators have found ways to circumvent the laws and regulations.

Mayor Hrib added that “the city authorities must immediately respond to these changes in order to reduce the pathological phenomena that arise in connection with slot machines.”

If the City Council approves the proposed ban on slot machines today, it will take some time before all gambling devices disappear from Prague. Under the draft decree, operators will have to remove their slot machines after their permits expire. Some of these permits are understood to be valid through 2023.

The Czech capital’s Prague 7 municipal district banned gambling establishments in 2015 through a decree signed by city officials. The last gambling site in the area closed doors in November 2019 to mark the end of a process that took longer than originally expected.

The closure of Prague 7’s gambling establishments was supported by 92% of all voters in a local referendum held in 2014.

Intertops Poker has extra spins deal on Book of Darkness

The Borgata Casino in Atlantic City welcomes poker back this week

Poker is returning to At