Our new Game of the Day feature starts on Friday night as domestic football returns with a Championship scuffle in west London between QPR and Luton.

For the next week we’ll be picking out our favourite fixture of each day and giving it a little extra love and attention – running the rule over the two teams, keys to the game, stats and trends and also twisting the arm of the Betfair traders to get a special odds boost for a selected double on our Game of the Day.

It’s the Kiyan Prince Foundation Stadium first up for us on a betting trip that will take in some of the biggest games in the domestic top-flight and around Europe – kicking-off with what is developing into a genuinely wide-open race for play-off places in pursuit of the holy grail that is the Premier League fortunes.

The most wide-open Championship for years

Rangers sit in sixth in the fourth and final Championship play-off spot, but it’s a super competitive league this year and although Luton are down in 11th they’ll go above Friday’s hosts with a victory – sitting just two points behind.

Just six points separate fifth and 16th in the Championship table with 17 games gone so any run of form can see a team come from nowhere and get right up into the play-off conversation.

Even Luton, with two defeats in three, can catapult themselves into a play-off spot, even if temporarily, with victory here on Friday night but with the R’s having the second-most points and home points in the Championship in 2021 it’ll be a tough assignment.

QPR have generally been trending in the right direction in the last few years, finishing 19th, 13th and ninth in the last three seasons, and a win here would be another step on the road to making a Premier League return for the first time since 2015.

Rangers have dominated this fixture in recent times with just one defeat in the last 20 league meetings, and at home they’ve not lost to the Hatters since 1984!

Goals have flowed too with QPR scoring three times in the last three straight home meetings (all wins) and even boss Mark Warburton can get in on the act too – in his four-game unbeaten run against Luton as a manager his sides have scored at least twice three times.

The stats do stack up against the visitors even though they’re due a win by their own consistently inconsistent form which has seen Luton win every other game in their last eight contests. They lost last time out, so…

The only other stat in Luton’s favour is QPR aren’t big fans of Friday night lights as they’ve won just one of the last seven Championship games played on this day, losing five of them with one draw.

On balance you’d have to go with the hosts, who are the only team in the Championship to have scored in every game, and have only lost to Bristol City on home turf in the league this season, and with Luton conceding twice in three of the last four.

But this has potential to be a cracker though as Luton will present a big danger with a prolific front two and with the team underperforming on the xG stats so more goals could be just around the corner.

Warburton is hoping joint top-scorer Lyndon Dykes can return to action after an ankle injury kept him out of Scotland’s games during the recent international break, as he’ll need a late fitness test in order to start.

“We’ve got to see how he is,” said Warburton, who will play Charlie Austin if Dykes can’t go.

“You look at the amount of football Lyndon has played, he never gets a break, all credit to him, he has established himself as Scotland’s number nine and is a consistent goalscorer for his country and done supremely well.

“But it just means he never gets a break, so we have to look after him.”

Moses Odubajo and Andre Gray also need checking with hamstring and knee injuries respectively while Dykes’ fellow top-scorer Ilias Chair only returned from Rabat on Wednesday after playing for Morocco, but he should have no problems running out from the start.

Luton boss Nathan Jones may decide to bring Fred Onyedinma back into the side, while Jordan Clark and Luke Berry both gave a chance to return from injury. 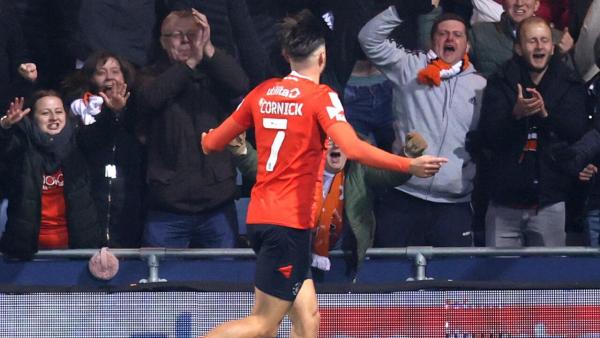 Scottish striker Dykes is the first name that springs to mind but one goal in six plus that ankle injury worry would, and should put punters off backing him in this one. Maybe if he’s in the starting line-up then that could change but ahead of time it’s not worth the risk.

Rangers midfielder Chair is an interesting one though, he’s got five goals in the last eight league games but none in the last four would be a worry if you’re backing him at 3.613/5 anytime scorer.

If you fancy Chair to score then you’re perhaps better off taking a punt on him to score first at 6.05/1 as three of the last four times he’s found the net it’s been the opening goal of the match so he’s found the nack of breaking the deadlock.

The two most in-form and prolific scorers are both on Luton’s team though with Elijah Adebayo and Harry Cornick notching eight and seven league goals respectively this season.

They’re both around 3.7511/4 on the exchanges to score anytime but they’re also on our radar for our special odds-boosted double.

Both men have scored two goals in a game twice this season so they’d both be decent shouts for bagging another brace here with Adebayo slightly shorter at 15.5 and Cornick 19.5.

But preference here is for both of them to bag a goal against QPR, which thanks to our friends on the trading floor has been boosted from 13/2 to 15/2 for our special week of Game of the Day pieces.

The two have scored in three games so far this season, including against Middlesbrough just two games ago so they’re well capable of getting our special week of Game of the Day features off to a winning start!