It probably should to be true of every race, but punters would do well to cast all previous ante-post bets and pre-conceived ideas to one side once you know the final make-up of a field, and attack the Grand National with a fresh, critical pair of eyes.

I do come into the nation-stopper having backed three horses – Santini and Kildisart at 50/1 each-way, and Éclair Surf at 20s and 18s – and they are trading at similar win-only prices on the Exchange now, so I haven’t particularly snaffled any outstanding value there.

Santini is the only one of those I have actually tipped in these columns, though.

Do I still fancy all three? Yes, of course, to varying degrees.

Santini is the subject of a bit of a social media fun with his “The Boat” nickname, but he is certainly well-handicapped for a test his grinding, Grade 1-back class profile suggests really should suit.

Kildisart is another well-treated horse, with winning course and big-field Festival form, and a promising comeback over an inadequate 2m4f under his belt.

And Éclair Surf’s form claims are there are for all to see given the way his Warwick win and his Eider second to Win My Wings have worked out.

But I am not blind to the fact that they all have downsides too and, after chatting with someone about Éclair Surf’s jumping on Thursday morning, I went back and had a thorough look at his performances this season.

Obviously, he fell at Bangor and walked through one at Chepstow next time (he was cantering on both occasions), and he guessed badly at a ditch when winning the Warwick Classic. And, although much better at Newcastle last time, he was a bit hesitant at a couple.

I must admit it did make me think he could have a harder job getting around Aintree than I first acknowledged when assessing his claims last Sunday (and backing him then) but I have already got involved and I am certainly not closing out any positions.

Basically, if he puts in a blemish-free round – and “if” is the most expensive word in the punting dictionary – then I do think he is the one to beat, as he scores highly on all other fronts. He is the best handicapped horse in the race.

Look, I am not going to put you off backing anything in this race – they are all easy to make a case for at their respective prices, with no exceptions – but my fourth and final dart at the race is going to be thrown in the direction of Noble Yeats, for all he has plenty of questions to answer, not least his stamina

And that surprised me, as he hadn’t been on my radar at all in the lead-up.

Poetry in motion at a big price

He had been an “eyecatcher” in all his Irish runs ever since winning over an extended 2m2f at Galway in October, so much so that Robert Waley-Cohen got his chequebook out on the eve of the Grand National weights and bought him for what I hear was a very punchy sum indeed, considering he was rated just 148 and had a very patchy profile.

On the surface, at least.

But race-readers have had a field day with him this season, and the promise he showed when second to Ahoy Senor in the Towton at Wetherby in February was there for all to see.

He didn’t receive an optimal ride there, shall we say, but he still finished in front of subsequent Scottish National fifth Ashtown Lad and next-time-out Uttoxeter winner Saint Palais and I thought he shaped well enough in the Ultima last month.

It is fair to assume connections would have been working backwards from this race for him, for all he is a lightly-raced 7yo – the trends merchants will be laughing, as not only is he a novice, but no horse of that age has won the race since 1940 – and the first-time cheekpieces adds another dimension (hopefully positive) to his chances, too.

He was a bit of a yo-yo horse in the ante-post market on the Exchange, trading at a low of 26.025/1 at the time of the Weights’ Lunch in February but available at 120.0119/1 when it was suspended on Thursday morning.

I actually drafted that argument before his jockey announced he would be retiring after the ride, so give us a story, Samuel. Mind you, he was trading at 20 points bigger before that news, as maybe it brought the horse into new focus for many.

He is currently 40/1, six places, if you want to back him each-way with the Betfair Sportsbook, but I am playing win-only on the Exchange at the price. Any 70.069/1 or bigger there is fine.

I could have put up any number of horses, who are all far more likely winners and shorter, safer prices, but he is the bet for me at the current odds.

I will deal with the ITV races first – mainly because when I was writing the first draft of this column on Thursday afternoon, no prices were available on the opener – and first up on the terrestrial box is the Grade 1 2m1f novice at 14:25.

It has a lot of depth to it, as well.

Three Stripe Life is the proven Grade 1-form angle and Walking On Air has the potential to hit the top grade (even if he has had his issues since winning a poor race impressively at Newbury in January), as well as those with rock-solid handicap form (Good Risk At All and Colonel Mustard) and a talented mare, with good course form, getting the 7lb sex allowance in Elle Est Belle.

It’s a right tricky one to call.

I would lean towards County Hurdle third Colonel Mustard on the Exchange at double-figures, if forced – though they are clearly worried about the longer trip for him, as they put a first-time hood on – but this race certainly does not lack for plausible winners. 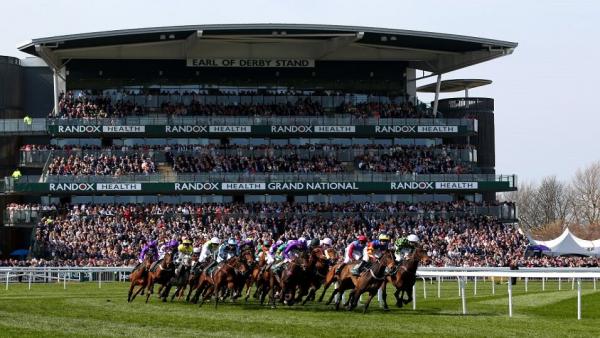 All roads surely lead to Edwardstone in the 2m novices’ chase at 15:00 but his price reflects that.

He has danced every dance this season though, and he does meet a talented horse in Gentleman De Mee, but, in the unlikely event that he does touch evens on the Exchange, then even I may be tempted to back the Arkle winner.

But maybe Third Time Lucki will finally get his revenge on him, who knows?

I didn’t think I would be having a bet in the Liverpool Hurdle at 15:35, but the front three surely take out too much of the market, and I was going to take them on with a horse who finished behind them at Cheltenham in the shape of Koshari at 25/1 each way with the Betfair Sportsbook.

But then the price went to 16s overnight on Thursday, and I had to ditch the tip.

It was annoying, but I am very price conscious, so no bet for now. If he drifts back out, I will be backing him, and I will post accordingly on Twitter if I can (I will be getting prepped for an MRI scan on Saturday afternoon around then!).

Here is the argument for him, anyway.

You could argue that he never quite reached the expected heights when with Willie Mullins, though he did win a valuable 2m4f handicap at the Punchestown Festival at 25/1 last season, and he somehow found his way to his current yard in the autumn (presumably a private deal was done after he didn’t sell at the October sales).

However, he has done his new trainer and owners proud, netting an 80/1 surprise when winning a handicap off a mark of 149 over course and distance in November, and then running a screamer after a long break when seventh in the Stayers’ Hurdle.

He travelled well throughout that day, got messed about a bit on the run-in, and was only beaten under eight lengths, so he ran another huge race there at 100/1 and I have my doubts about whether that track would be ideal for him, given how his finishing effort tapered off after the last.

I can see this easier track suiting him, and the fact of the matter is his best career performances have come on his last two starts, and maybe there is a bit more to come, even as a 10yo.

Commodore could see off all-comers

Commodore is first reserve for the Grand National but compensation of sorts could await in the 3m1f handicap chase at 16:15.

The key to this horse is catching him fresh, and he is certainly that here, having not been seen since running away with a Cheltenham handicap in December.

And first time out last season he failed by only half-a-length to give a certain Snow Leopardess 4lb at Haydock.

He went up 9lb for that Cheltenham success but it could have been worse given the way he destroyed that field.

Sure, this is far more competitive – though the time of the race appears to back up the visual impression he made there – and an easy lead may be hard to come by in this (though I’d fancy him to get on the front end), but if he gets in to that devasting jumping rhythm then he could see off all-comers here.

Two good Fits for the opener

I don’t do bumpers – though there is a very good word doing the rounds for 6/1 chance Ernest Gray in the finale – so it is back to the opener at 13:45, a race in which I am very content to give If The Cap Fits another spin after a gallant sixth at odds of 33/1 in the Pertemps.

I think that effort can be upgraded too, as his 7lb claimer opted to stay out of trouble on the outside all the way, and maybe that track doesn’t see him to best effect anyway, for all he finished off his race very well.

Aintree seems to suit, as he finished fourth in the bumper at this meeting in 2017 and he then beat Roksana in the Grade 1 Stayers’ Hurdle here in 2019, so off a mark off just 137 (unchanged after Cheltenham), with Daryl Jacob back in the plate, he gets my vote at 20/1 each way, five places, with the Sportsbook.

I want two running for me in the tipping stakes – in reality it will be three betting-wise as there is no way is Dans Le Vent is winning this without me having at least a score (probably more) on him, given the questionable rides he has received since winning over this trip at Haydock in November – and Party Business stands out like a punk’s hairdo at a Women’s Institute meeting.

He just looks far better than a 132-rated hurdler, and he simply hasn’t had the chance to show it.

He was fifth off that mark in the Martin Pipe last time, which was remarkable in itself considering he was brought to a complete standstill when hampered at the second flight – he was bang-last afterwards – and was also messed about in the straight, before finishing off his race strongly.

He is by stamina influence Shantou, so I can see this step up in trip really suiting him on pedigree as well as on run-style, and he certainly powered home when winning over an extended 2m5f at Ascot in December, the form of which has worked out very well, in a good time.

And he certainly wasn’t done with when on the premises when falling two out in the Challow afterwards, too.

Canada Soccer has cancelled a friendly between the men's