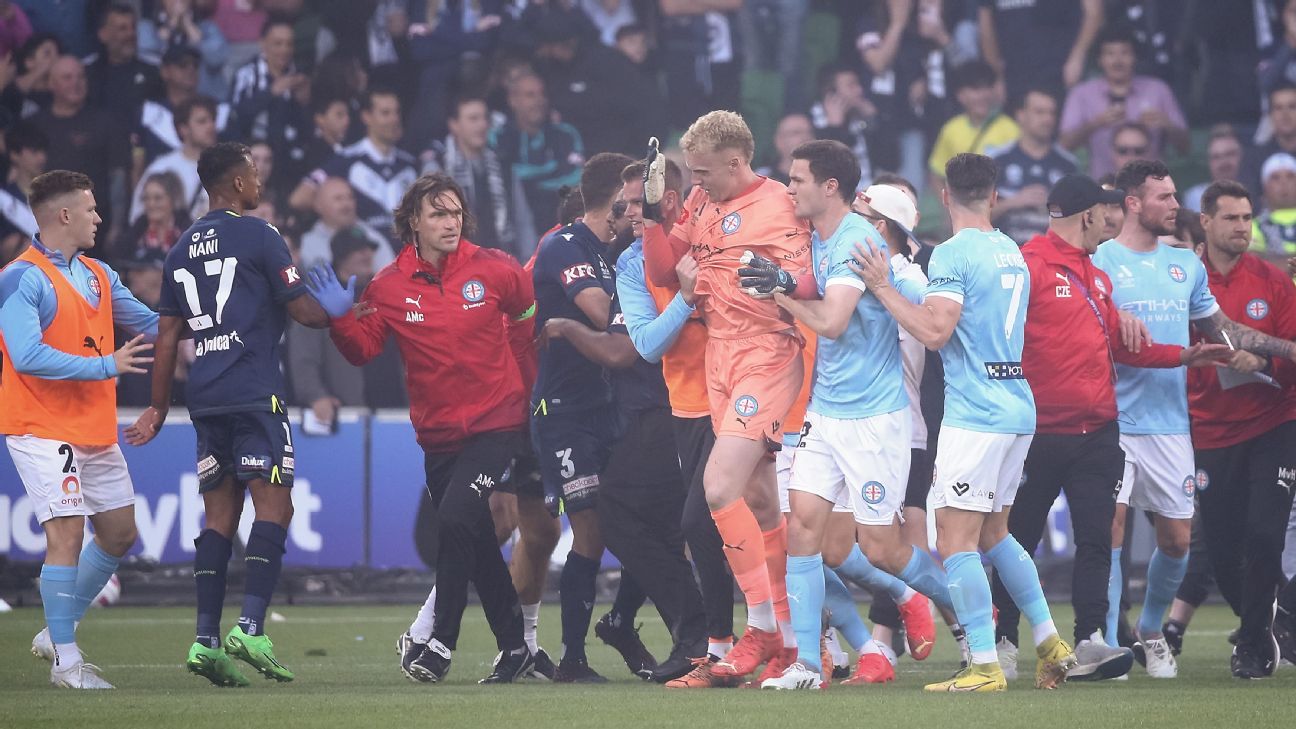 Glover suffered a concussion and facial laceration when he was hit by the bucket wielded by a pitch invader. Referee Alex King was also injured in the incident.

A television cameraman was hurt after being struck by a flare while two security guards were also injured.

FA said the person who threw the bucket, who has already been charged by Victoria Police with violent disorder and discharging a missile, among other offences, had been found guilty of “entering the field of play without authorisation and using an item [bucket] with the intent to cause damage or harm.”

He has been found guilty by FA “of entering the field of play without authorisation and engaging in conduct that did or was likely to cause harm or endanger others”.

“The actions of these two, and others who are of interest to us, are completely unacceptable and those people and their behaviours will never be welcome in our game,” Football Australia chief executive James Johnson said in a statement, indicating there would be more bans to come.

“Football has a zero-tolerance policy to disruptive, destructive, violent, and anti-social behaviour at its sanctioned events, and it will not tolerate behaviour that has the potential to threaten the safety or security of spectators, players, and officials.

“These significant bans against these individuals are consistent with this position.

“Football Australia is working around the clock on this investigation to ensure that the scenes witnessed at AAMI Park in Melbourne are never repeated again.”

The pair are banned from attending all FA-sanctioned football matches, including A-Leagues, Australia Cup, NPL, Socceroos and Matildas games.

They also can no longer register as football participants.

A further five men were identified by Victoria Police on Tuesday, with another five people still outstanding.

Victory have until 9am AEDT on Wednesday to show FA why they “should not face serious sanctions for bringing the game into disrepute.”

FA has made it clear it will dish out tough sanctions, with points deductions, fines and forcing Victory to play behind closed doors all options on the table.

The game’s governing body also needs to decide whether the result of Saturday’s derby will stand — City were leading 1-0 before the match was abandoned.

The proximity to Victory’s next game — away to Western United at AAMI Park on Boxing Day — may mean FA hands out interim sanctions in the short term.

How to Make Super Bowl Bets Online; See the Steps to Making Your Bets at Online Sportsbooks

Make sure your Super

Does Marsch’s dismissal pave way for him to lead the U.S.?

Timing is everything in all manner of ways. That is espec

Juventus are concentrating on just making sure they get e