The U.S. commercial gaming industry’s momentum is far from over. The sector delivered in October revenue of $5.29 billion, increasing 10.5% year-over-year and marking an impressive 20 consecutive months of growth. But most importantly, October was the industry’s second highest-grossing month on record, only eclipsed by March 2022, at $5.35 billion.

The figures were unveiled on Tuesday by the American Gaming Association’s (AGA) Commercial Gaming Revenue Tracker, which provides state-by-state and nationwide insight into the U.S. commercial gaming industry’s performance.

All in all, the picture is a promising one for the sector which, as 2022 draws to a close, remains on track for another record-setting year. Over the first ten months, commercial gaming revenue totaled $49.85 billion, 14.7% ahead of the same 10-month period in 2021.

Gaming revenue grew year-over-year across all verticals in October, with iGaming revenue setting an all-time monthly record. Combined revenue from slot machines and table games at casinos accounted for most revenue (76.2% of total) at $4.03 billion, while sports betting grossed $804.7 million (15.2% of total) and iGaming $453.1 million (8.6% of total).

Together, sports betting and iGaming combined for $1.26 billion in October, nearly a quarter (23.8%) of total gaming revenue. Largely driven by a busy sports calendar, September and October have seen the highest proportion of commercial gaming revenue come from these emerging verticals since the peak of pandemic-driven casino closures in 2020, notes AGA. 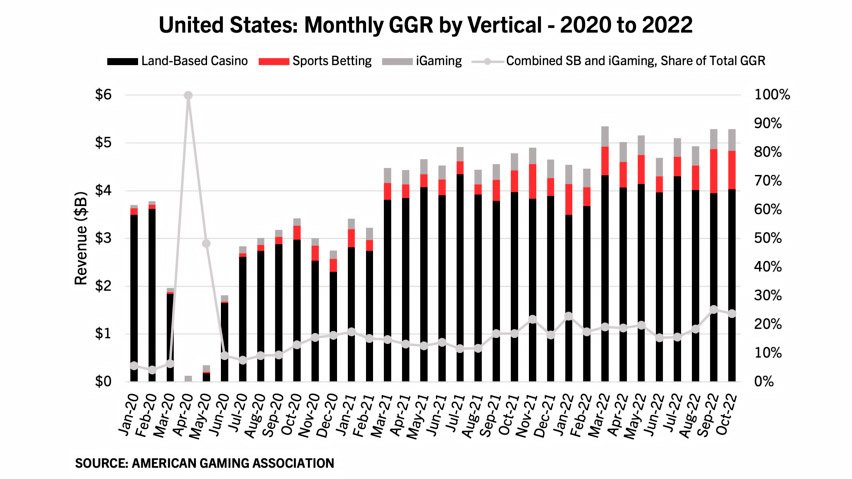 At the individual market level, 26 of 33 commercial gaming jurisdictions that were operational a year ago (excluding Arizona, which has not reported October data) realized revenue growth compared to October 2021. Monthly gaming win contracted or remained flat only in Delaware , Maine, Missouri, New Jersey, Ohio and Oklahoma.

Extended through the first ten months of 2022, just three jurisdictions remain behind their gaming revenue pace compared to the same period in 2021: the District of Columbia (-9.2%), Mississippi (-3.6%) and South Dakota (-0.6%).

While D.C. revenue is sensitive to swings in the hold percentage of its small sports betting market, the slowdown in Mississippi and South Dakota largely reflects tougher than average comparisons as Covid-restrictions in those states were eased earlier in 2021 compared to most other jurisdictions, explains AGA.

Nationwide slot machines and table games revenue of $4.03 billion in October marked an increase of 1.5% over the same period last year. Slots generated revenue of $2.91 billion, up 2.4%; while table game revenue increased 1.9% to $846.9 million.

As for state-level highlights, October marked the first full month of operations for casino slot gaming in Nebraska after it became the 27th commercial casino market on September 24. The state’s first commercial racino grossed about $4.3 million in revenue, with monthly revenue per slot machine matching or outpacing many properties in nearby Iowa, Kansas and Missouri.

Year-to-date, casino slot machines and table games have grossed $39.97 billion, 7.4% ahead of the same ten-month period in 2021. At the state level, 21 of 25 commercial gaming states with slot and table gaming in 2021 saw combined revenue from these verticals grow through October, AGA points out.

Sports betting activity was at its highest since January thanks to a packed October sports calendar, as Americans in 27 legal commercial sports betting jurisdictions wagered $9.07 billion on sports, generating $804.7 million in revenue. Through October, annual sports gaming handle stands at $73.11 billion, a 70% increase from the same ten-month period in 2021. Year-to-date sports betting revenue is $5.76 billion, up 77.9% year-over-year.

Meanwhile, iGaming operations in Connecticut, Delaware, Michigan, New Jersey, Pennsylvania and West Virginia generated a combined monthly revenue record of $453.1 million, up 26.8% on the same month in 2021. Year-to-date iGaming revenue stands at $4.08 billion, up 38.1% on the same period in 2021. TTM revenue is $4.71 billion, a 1.8% gain on the preceding 12-month period.

Queen of the Gods Online Slot from High 5 Games

We take a closer look at the Queen of the Go

Circa Sports announces Circa Square bets in celebration of Super Bowl

An overview of the Latin American online gambling market and opportunities

Latin America is a diverse region, and this