‘We have a moral debt to him’ 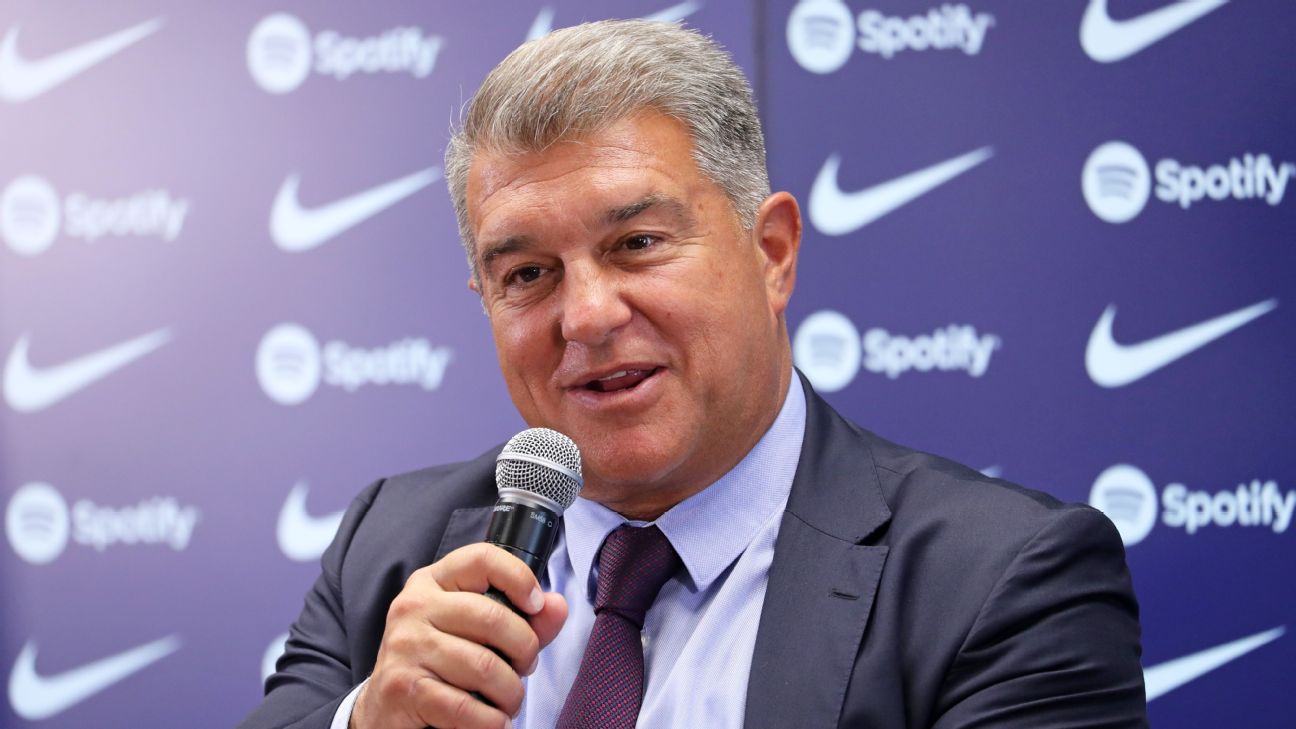 Barcelona president Joan Laporta has reiterated his desire to see Lionel Messi end his career at the Catalan club.

Laporta told ESPN last week that Messi’s story with Barca “is not over.” Coach Xavi Hernandez has said a return this summer is “impossible” but there is a window next year when the Argentine forward’s contract with Paris Saint-Germain is set to expire.

“It is an aspiration that I have as president and I would like it to happen,” Laporta told reporters at an event in New York when asked about Messi retiring at Barca.

“I was co-responsible for an ending that I consider provisional. Messi’s story at Barca did not end as we all wanted, it ended conditioned by financial reasons and we have a moral debt to him.

“In that sense, we would like the end of his career to be with the Barca shirt on, applauded at every stadium he plays at.”

Messi, 35, was forced to leave for PSG last August because Barcelona could not afford to renew his contract due to financial problems.

However, the sale of 25% of their domestic television rights for the next 25 years, worth over €600m according to Laporta, has allowed Barca to heavily invest this summer, with Franck Kessie, Andreas Christensen, Raphinha, Robert Lewandowski and Jules Kounde all joining the club.

Barca’s spending has raised eyebrows across the world of football, with the club’s latest accounts showing gross debt of over €1 billion, but Laporta called on others to keep their noses out of the club’s business.

“I will give [the critics] the benefit of the doubt because maybe they thought we couldn’t do it, but they had not considered the strength of Barca and the drive of the new board,” he said.

“It’s down to a lack of knowledge and information about our club. To those that are surprised, I would say we are very much alive and back on the market — and there may be more surprises.

“The [sale of TV rights] has really strengthened the club. For 25 years, we have raised €667m. I would have preferred not [to have sold them], but I did what was necessary and the football [world] didn’t expect it.

“Everyone knows what they have to do and if I don’t get involved with others, I would ask that they don’t interfere with us. We’re going to compete on the pitch and we will see who’s done the best work. I don’t say that with a desire to argue, but people should worry about themselves.”

Bayern Munich coach Julian Nagelsmann is one of the people who have raised doubts about Barca’s spending, labelling them the “only club in the world that have no money, but then buy all the players they want.”

Laporta responded: “I would ask him to focus on [Bayern’s] accounts, which have received a significant amount of money for the transfer of Lewandowski. I respect everyone and won’t talk about other teams’ finances.”

Kessie and Christensen arrived for free, but Barca have spent over €150m on the signings of Raphinha, Lewandowski and Kounde, with Chelsea duo Cesar Azpilicueta and Marcos Alonso still targets as well.

However, despite raising cash to complete the transfers, Barca still have work to do to be able to register all their new signings, as well as the new contracts signed by Sergi Roberto and Ousmane Dembele.

The Blaugrana still need to move on other players and reduce their wage bill to fit all the new arrivals within their LaLiga-imposed spending cap by the time they kick off the new campaign against Rayo Vallecano on Aug. 13.

Their limit stood at -€144m at the end of last season — the only negative cap in the Spanish league — but will increase significantly on the back of the capital raised this summer.

Kilmarnock 0-5 Celtic: Hoops go top of the table after rampant first half showing