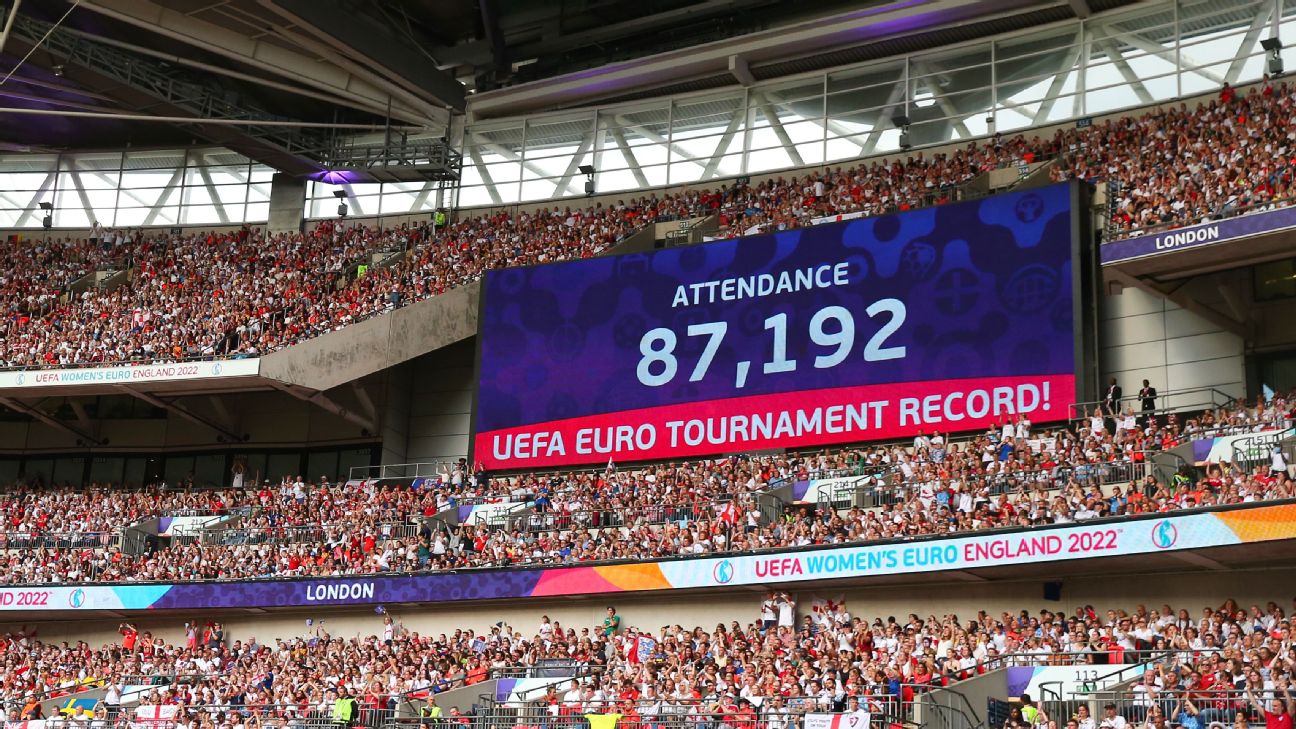 England‘s women made history on several fronts on Sunday evening as they beat Germany 2-1 in extra time to be crowned European champions for the very first time.

Going one step further than the men’s team managed at Euro 2020 last summer, Sarina Wiegman’s effervescent side scored the winning goal in the 110th minute to send a packed Wembley Stadium into raptures.

Indeed, it was confirmed that 87,192 fans were inside the stadium to witness the Lionesses’ break new ground together — the third-highest attendance recorded at any level of European football in 2022 so far.

Astonishingly, the top three highest attendances in Europe in 2022 have all been for women’s games, with the Euro 2022 final joining a double-header of huge crowds recorded at the Camp Nou last season when Barcelona set two new records in the space of a month.

A thronging crowd of 91,553 turned out to watch Barca face rivals Real Madrid in the quarterfinals of the Women’s Champions League, only for that to be beaten by the 91,648 fans who turned up just a few weeks later to watch Barca play Wolfsburg in the first leg of the semis, a game the Catalans won 5-1.

Prior to that, the long-standing record attendance at a women’s football match was 90,185, which was set in 1999 during the Women’s World Cup final between United States and China at the Rose Bowl, Pasadena.

Ho hem tornat a fer, CULERS!
We did it again: The WORLDWIDE RECORD is ours!
¡Lo hemos hecho una vez más! pic.twitter.com/wHeMkSsYmN

Barcelona’s men’s team really struggled to attract fans in a disappointing season, with the biggest attendance in 2022 being the 79,468 who turned up for a Europa League game — and controversially 30,000 were from Eintracht Frankfurt.

Just to add a little context in terms of the English game, last season’s men’s FA Cup and Carabao Cup finals, both of which were also staged at Wembley, attracted crowds of just under 87,000 apiece.

The highest single-game attendance for a men’s Premier League game in 2021-22 was 73,564 at Old Trafford as Manchester United drew 1-1 against Chelsea. Meanwhile, the Champions League final between Liverpool and Real Madrid saw 75,000 supporters attend at the Stade de France in Paris.

The highest attendance for a men’s league game so far in 2022 was the 81,365 sell-out crowd that watched Borussia Dortmund lose 4-1 at home to RB Leipzig in the Bundesliga in early April.

Incredible statistics that clearly demonstrate just how much support the Lionesses took with them into the final.