The stunning 2022 FIFA World Cup Final played Sunday between eventual victor Argentina over defending champion France in a thrilling 4-2 shoot-out was the second-busiest day of the year for online sportsbooks in the US.

Though soccer isn’t nearly as popular in the US as it is in Europe and throughout much of the rest of the world, the 2022 World Cup finale caused a flurry of activity on legal internet sports betting platforms. GeoComply, a geolocation security and compliance leader in highly regulated markets such as iGaming and online sports betting, told Casino.org that the title match generated 7.9 million geolocation sports betting transactions.

They say Americans don’t like soccer, but they certainly got a kick out of betting on the World Cup,” Sam Basile, GeoComply vice president of business development for North American Gaming, told Casino.org. “GeoComply’s data disproves the myth that Americans are not interested in ‘The Beautiful Game.’”

A geolocation transaction is when an online sportsbook utilizes GeoComply software to pinpoint where a specific player is physically located before accepting their wager or financial transaction. At 7.9 million geolocation transactions, the World Cup championship match trailed only Super Bowl LVI played in February as the busiest sports betting day in the US this year.

The World Cup final extending into extra minutes and then a shoot-out presumably brought additional viewers to the broadcast.

Argentina and France were deadlocked at 2-2 after 90 minutes of regular play. During the 30 extra minutes, each squad scored to take the match to 3-3. The teams then went to a shoot-out where Argentina won 4-2.

GeoComply said the match, which was dubbed almost immediately as the best World Cup finale ever, resulted in about 1.7 million new online sportsbook account registrations. That is also second in 2022 to only the Super Bowl. 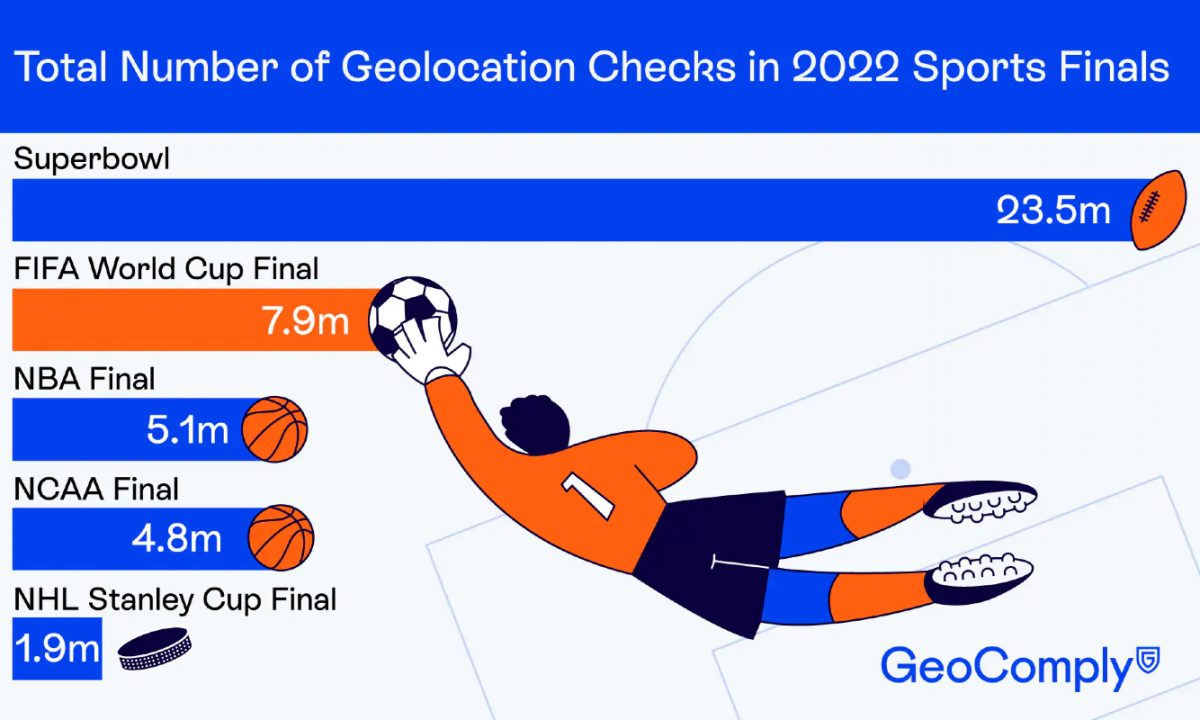 The 2022 World Cup was the first World Cup where sports bets on the global tournament were legal in the US outside of Nevada. The US Supreme Court in May 2018 punted the federal law that had limited such gambling to Las Vegas’ home state.

The 2022 World Cup was also likely more popular this year in North America because both the United States and Canada participated. This year’s World Cup was the first time that the tournament included both countries.

American football is king in the US when it comes to sports betting. The Super Bowl is annually the most-bet sporting event in the country, but soccer’s strong showing for the 2022 FIFA World Cup might entice oddsmakers to place more emphasis on the sport moving forward.

Soccer traditionally hasn’t been a major moneymaker for oddsmakers. In Nevada, for example, the state Gaming Control Board groups soccer betting into its “other” category, which includes everything other than football, basketball, baseball, and hockey.

Over the past 12 months, Nevada oddsmakers have won $44.6 million from the “other” category. Meanwhile, American football generated net revenue of more than $202.5 million.

Texas legislators are on the move to bring casino gamblin

Boyd Gaming has a winning strategy for growth

Boyd Gaming has used digital to enhance its land-based op

Fewer gamblers came to Macau for CNY, but they bet more

TikTok vs Youtube Boxing Betting ▶️ Battle of the Platforms