They say you miss 100% of the shots you don’t take so, swept away in a haze of WPT World Championship hubris, I threw caution to the wind. Specifically, I anted up in the $1,100 event on the penultimate day of the series. 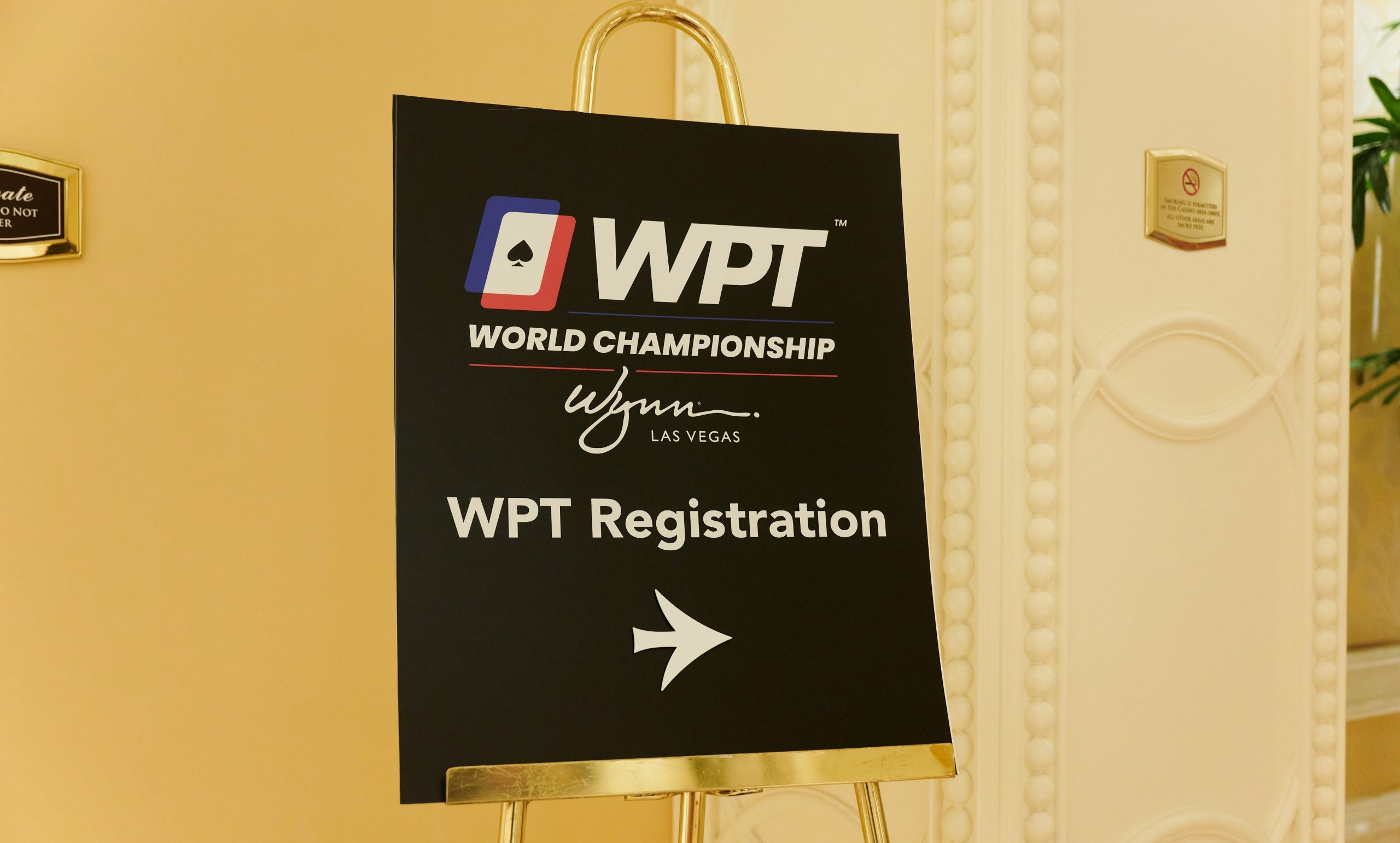 I took my shot in a $1K WPT event and, even though it didn’t pay off, it’s an experience I’ll remember forever. (Image: Flickr/WPT)

How did I go? Well, I’m sitting here writing this in the media room while a few hundred people play for a top prize of $100,000+. So, if we’re being pedantic, it was a disaster. But, if we zoom out and forget about prize money, it was a success.

OK, so losing more money in a poker tournament than I ever have wasn’t exactly how I planned to end my trip. However, some things in life are more important than money. I’ve written endlessly about experiences on this trip so, caught up in the magic, I wanted to experience the WPT World Championship as a player.

With some semblance of trepidation but a head full of dreams, I entered the $200,000 guarantee. It was only a one-day event and the turbo structure gave me a fighting chance against a room full of pros. Well, at least that’s what I told myself.

That confidence gradually ebbed away as I found myself in the alternates queue alongside the likes of Brian Hastings and Florian Duta. Undeterred, I sat down with my 25,000-chip starting stack and did my best to avoid the one pro I recognized at the table, Matthew Affleck. 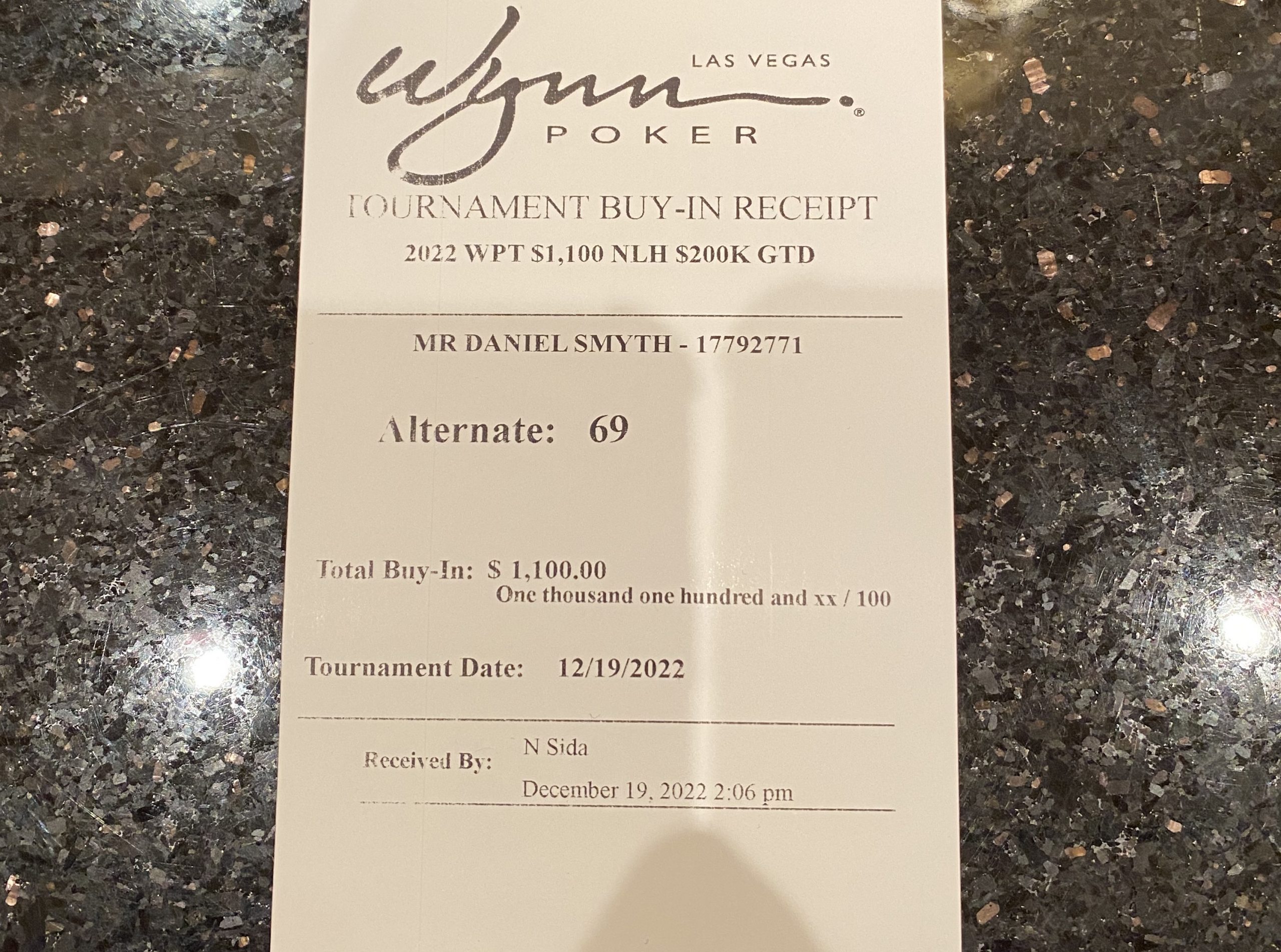 A ticket and a dream. (Image: Daniel Smyth/CardsChat)

I’m pleased to say I succeeded in that regard. My other tactics, however, were less successful. I certainly played more conservatively than I would have liked. That was partly due to the cards, partly due to my reluctance to look like the table donk.

Fortunately for me, a few players at the table didn’t have those reservations. The re-entry format made all-ins with less than premium hands a standard play for some. That was good news for me when I moved in with pocket nines and found a caller with 5♦ 2♦.

Two diamonds on the flop gave me a sweat but, for once in my life, I avoided a bad beat. The somewhat timid strategy continued from that point on. I made a few moves but, ultimately, my stack was dwindling and, without any spots to exploit, something had to give.

Out but certainly not down about it

Eventually, I raised the button with A-7 and the small blind (who was also short) moved in. I called, he tabled 8-6, and the flop was his friend. I couldn’t hit any of my outs and, a couple of hands later, I was out. It was a fairly lackluster way to bust out of my first WPT event but I can’t complain.

I’ve never been compelled to enter a $1K event before, not least because it’s more than my bankroll can handle. However, I’ll admit, I got caught up in WPT World Championship fever. I saw everyone else having fun and I wanted to take a shot.

Would I do it again? 100%, yes. You have to take shots in life and this was a great opportunity to experience a world-class event. I wish I’d have tried to satellite into a tournament via WPT Global, but that’s irrelevant. 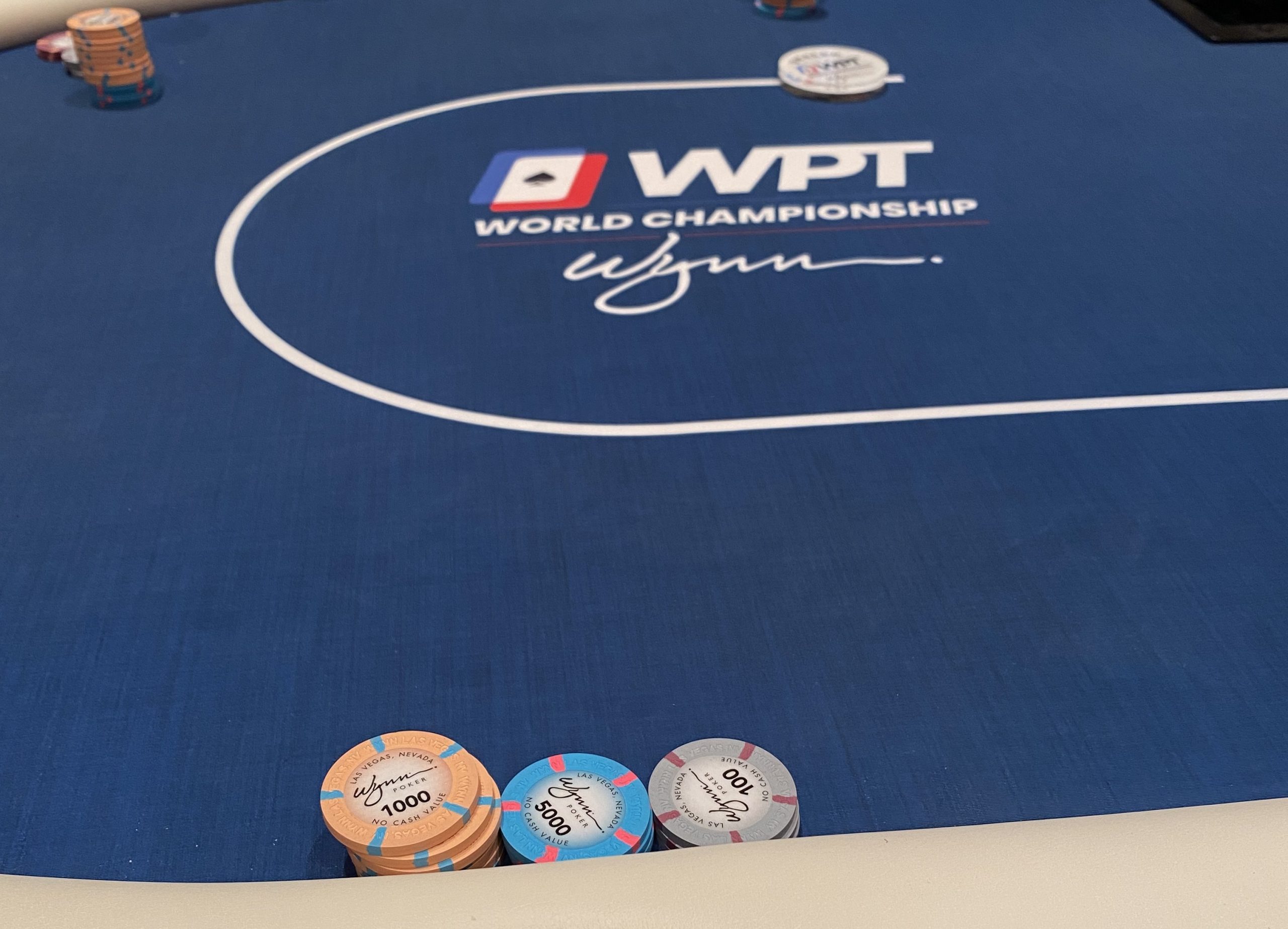 My stack dwindled but my desire to play again hasn’t. (Image: Daniel Smyth/CardsChat)

The value was there and that’s the important point here. The WPT World Championship has surpassed expectations and, as I’ve said in my previous posts, it’s harked back to the golden age of poker. For that reason alone I was compelled to put my money where my mouth is.

I’m glad I did, and I’m glad I got a chance to experience the event from both sides of the felt. Advising players what to do with their bankroll isn’t my job. However, if you find yourself within reach of a WPT satellite, I say grab it.

I can only speak from personal experience but I don’t think you’ll be disappointed. I took a shot and it didn’t pay off, but I did it because of the vibe here in Las Vegas. It’s been a fantastic experience even though I lost a chunk of money. When players go home without worrying about the money they’ve spent, that, for me, is the sign of a winning poker series.