The WPT World Championship is looking good from both sides of the felt. That’s what Liam Gannon, a poker reporter and player, told CardsChat this week. 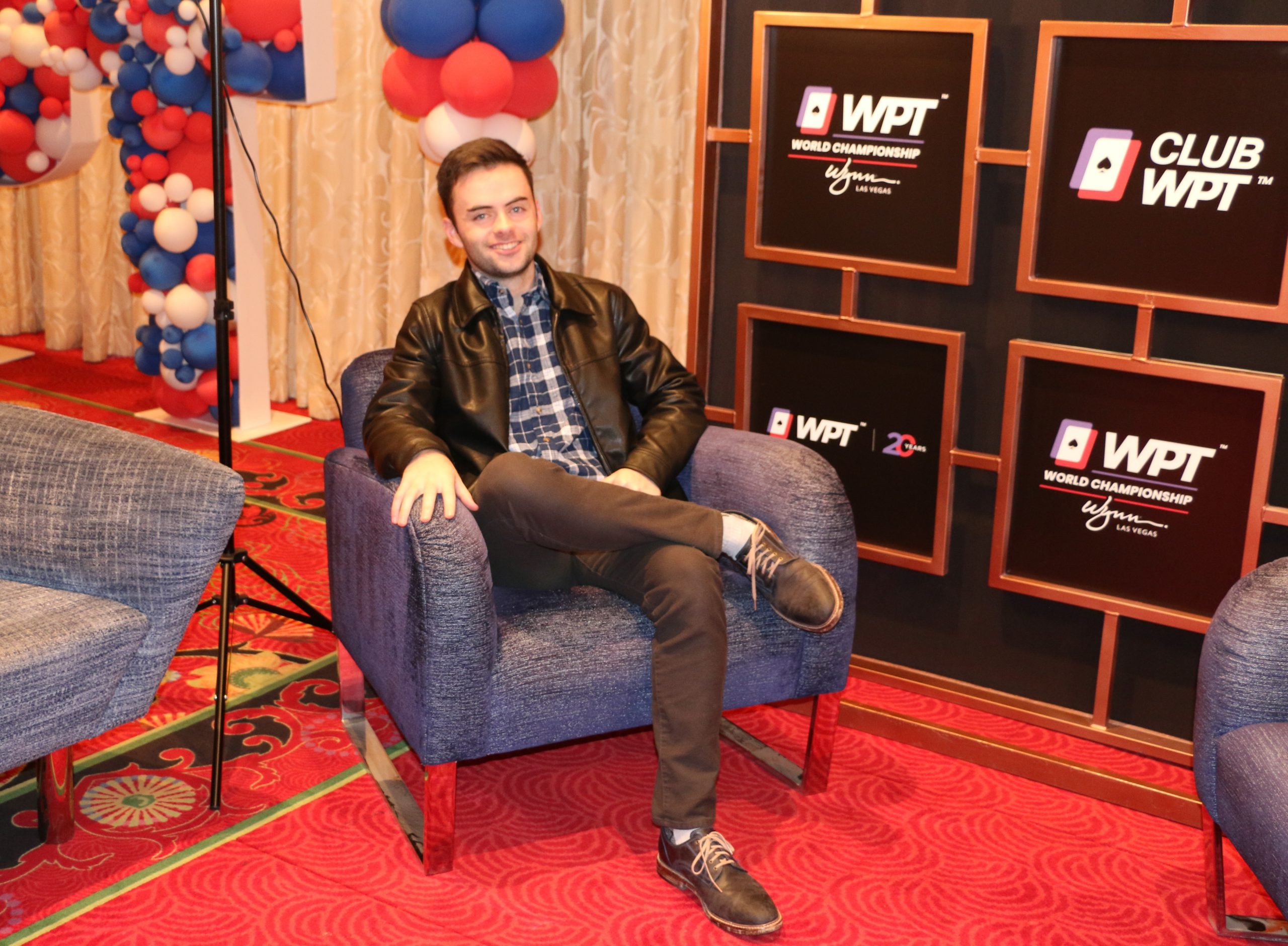 Liam Gannon believes poker is in the eye of a perfect storm, which is a big reason the WPT World Championship has been a success. (Image: Daniel Smyth/CardsChat)

Gannon got his shot at WPT glory courtesy of Amanda Botfeld. Like fellow winner Jules, he won the “life-changing opportunity” after submitting a social media post that Botfeld couldn’t ignore. That one post started a sequence of events that Gannon will never forget.

Unlike other contest winners and satellite qualifiers, Gannon has a unique perspective on the poker industry. As well as being a player, he’s a live reporter. This has given him a unique insight into the WPT World Championship.

“I’ve been to a lot of great poker series around the country but nothing compares to this atmosphere,” Gannon said.

For Gannon, the positivity started before he flew to Las Vegas. His social media post received a lot of love from the community but, as we discovered, that was just the start of what we later referred to as the WPT effect.

“The posting experience was very gratifying in and of itself. Everybody was coming out of the woodwork to support us,” Gannon explained.

Friends and colleagues showing their support was the boost Gannon needed to sit down in his first $10,000 tournament. It wasn’t his first tournament rodeo, but he’d never ridden a bull quite as big as the WPT World Championship.

Words cannot my express my extreme gratitude for this wonderful opportunity. Thank you so much to @amandabotfeld and @wpt_global for this life changing opportunity. It has been my absolute dream to play a $10,000 buy in tournament and I have been so lucky and blessed. https://t.co/v7boARmeZ7

Naturally, the occasion required the appropriate attire so, dressed in a suit, Gannon set out on his quest to become a WPT champion. Thanks to some coaching and a measured outlook on poker strategy, he wasn’t overwhelmed by the situation.

“It’s just a tournament. At the end of the day, we all get two cards and a broken clock can be right twice a day, and a good clock can be wrong,” Gannon said.

The young American played the cards as they were dealt but, in the end, lady luck wasn’t on his side. A four-bet shove with pocket queens put Gannon in a tough spot after Dan Shak called with pocket kings.

Liam love your exuberance for the game and life would be my pleasure to keep your poker trip going by putting you into the 3k 500k guaranteed tourney on the 15th . Dan https://t.co/Nny1mtst3f

An upset wasn’t on the cards but, after taking time to reflect on his efforts, Gannon was anything but upset. His dignity in defeat and composure throughout the tournament left a lasting impression on Shak who offered to stake Gannon in the $3,000 event.

“I woke up the next day and saw my Twitter was blowing up. I was over the moon and immediately said yes,” Gannon explained.

A second shot at winning a WPT title was more than Gannon could have dreamed of when he submitted his initial post to Amanda Botfeld. But, as we discussed, it’s emblematic of the vibe at this year’s WPT World Championship.

“I’m so grateful to Dan for doing that. He’s a big deal in poker. It was very generous and I was at a loss for words. Giving me the seat is emblematic of the WPT series,” Gannon said.

Winning is clearly important in poker but, as it’s been with all the stories told during the WPT World Championship, it’s not the only thing that matters. Gannon didn’t cash in the $3,000 event but the fact he got to play was a win.

Moreover, it’s a win for poker. As an industry insider, Gannon knows the importance of putting on world-class events and he believes the WPT has captured lightning in a bottle.

“This has been an overwhelmingly positive experience. From what I’ve seen, the vibe, the energy, the atmosphere, it’s all so positive. I don’t think I’ve felt an energy like it,” he said.

Poker’s perfect storm is making it rain in Vegas

It’s not just the WPT World Championship that’s thriving. Gannon believes there’s a “perfect storm” of factors coming together in poker right now. A desire for live events after COVID restrictions, combined with the rise of poker streams, has led to supersized fields the likes of which we’ve not seen since the Moneymaker era.

“I don’t remember a WPT being this big since I’ve been interested in poker,” said Gannon.

Pent up desire and live streams aside, it’s the two Gs, guarantees and giveaways, that have turned the 2022 WPT World Championship into a record-breaker.

“There are a lot of guys I know who wouldn’t have played this event if 300 people hadn’t won their seats via satellites and giveaways. That’s good because it brings in more entries,” Gannon said.

The two Gs have certainly brought in more entries. The WPT World Championship has raised the bar in every sense. The standards set this year are almost certainly going to be exceeded in 2023 and Gannon wants to get back here anyway he can.